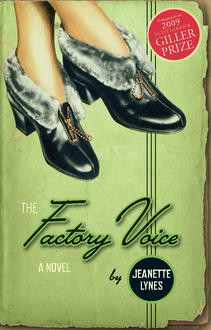 Jeanette Lynes' Giller-nominated  The Factory Voice (Coteau Books) follows women working in an aeronautics factory during the Second World War, but don't let that make you think you're traipsing through the past reading this book. With sexist attitudes towards women going away to nowhere fast and slim job prospects to those who work hard for them ringing uncomfortably familiar, The Factory Voice is not just a home front war story, but a modern-day parable. We talk to publisher Coteau Books about it.

We talked with Coteau's MacKenzie Hamon about  The Factory Voice:

ALU: What brought you to publish The Factory Voice?

MH: The Factory Voice is a book that remains an important read in the tumultuous year that is 2016, which gave us the "nasty woman" and other similar monikers. It gives readers a sense of where we've been, both as a nation introducing women into the workplace amidst war, and how far we still have to go. While the main plot of the novel focuses on the mystery behind the test planes at the factory, which keep crashing (is it sabotage? A design flaw?), the subplots within each chapter, and the work Lynes does in fleshing out every character in her work – both men and women – fully allow one to be swept up in a World War II factory.

Lynes’ in-depth research into the time period creates a compelling historical fiction novel that is as informative as it is entertaining. Not only did she herself work in a factory as a young woman, but she also spent time interviewing women who worked on the line during World War II at Canadian Car and Foundry, which was a factory that was transformed from public transportation production into a Hawker Hurricane aircraft design and assembly plant during the war. Many characters and scenarios in the work reflect real people – like Muriel McGregor, whose character is based on Elsie McGill, Canada’s first woman aeronautical engineer – and many of the situations the factory workers experience stem from Lynes desire to subvert the mainstream discourse of the time. The author adds: “My factory experience was brief but made a deep impression on me, especially the various loyalties and allegiances within the workplace, and how a factory becomes a kind of micro-world unto itself. I've always been fascinated by how people interact with each other and a fiction project like The Factory Voice allowed me the space to explore this fascination.”

MH: At a time when women are still trying to find their footing and equality is still much-debated online and in the news, The Factory Voice, and the very real men and women who stepped up during the war only to find themselves out of work by the end of 1945 with no prospects amidst a tumultuous world market, is as relevant as ever.

Thanks so much to MacKenzie at Coteau for answering our questions on The Factory Voice! Did you know that you get a free 2017 poster calendar if you buy a copy of this Giller-nominated work?