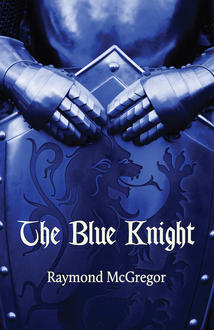 For Pink Shirt Day—a day dedicated to raising awareness of issues related to bullying—we're highlighting Raymond McGregor's The Blue Knight (BookLand Press) for its salient anti-bullying themes told through the story of Owen, the teenage protagonist who is chastised by everyone in his village. Below are five lessons from the book for children and adults alike.

1. Go on a journey of self-discovery. It’ll show you (and everyone else) what you’re made of.

Just take it from Owen, The Blue Knight’s fearless protagonist who begins a journey of personal discovery after he's picked on by everyone in his village. His journey even leads him to eventual respect as a local hero.

2. On this journey, you might even find some unlikely friends.

Owen first finds himself with an unlikely friend, a dwarf whom he learns to accept and appreciate despite their cultural and physical differences.

3. You might find your own voice and break through barriers.

By openly asking questions and expressing his own personal feelings, Owen begins to break down cultural barriers. He learns that while some people are different, they are probably also dealing with issues of their own. The dwarf teaches Owen to stop blaming others and instead, show them what kind of person he truly is. Although he does this by becoming a knight, he also transcends mentally and physically.

4. You'll become more empathetic.  You might even see the world around you in a new light.

Owen grows physically when casting a large fishing net. He begins to understand that with practice, he is capable of accomplishing new feats, all while providing time to think through his problems. This experience also allows him to appreciate other living creatures and to see the world around him differently.

5. When you confront yourself, you might learn that you’re way cooler than you thought.

Owen’s sense of self-worth increases by recognizing the efforts his friend and mother make for him. Every deed, from cooking dinner to nursing his wounds, becomes important. When he is accepted as a local hero by ending the terror of an evil dragon and a tyrannical King’s henchman, he finally finds the recognition from the townspeople he craved so deeply. The newfound abilities provide him with confidence and understanding that allow him to prosper as a productive member of society.

Thanks to Raymond McGregor for providing us with these lessons, and to Robert Morgan at BookLand for making the connection.

In Review: The Week of Feburary 10th