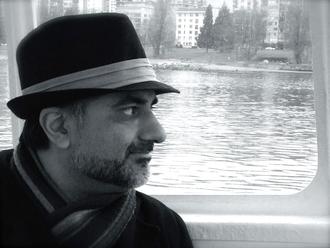 Uncle Yusuf was the part owner of the corner shop and halal butcher storefront located in the Peck in Walsall, England, along with his father who minded the cash till at the front of the store, where as children we purchased our small brown packets of sour candy.  My dad Mani sometimes went over to the shop or Yusuf’s house to fix or repair pipes, as was his trade.

On September 26, 1979, Uncle Yusuf’s tall white van reversed into our driveway on Bescot Road and parked close to the front doors and garage.  The darkness still hung over this industrial city full of factory air, detached and row houses, the M6 motorway (highway) that connected Birmingham and later London through the M1; the M6 was a continuous presence in our lives as the hum of cars never left our ears.

Throughout the short night I watched as car lights arced across the plastered craters of our ceiling and drew down into the corners of the walls. I wondered what it would be like to fly on a plane; what was this place called Canada. I felt a sharp excitement for another journey and a way of fleeing away from the fear I had of secondary school. I was happy to be leaving the UK and along with my sisters Gurdeep, Kuldeep, and our youngest brother Mandeep, we spent our night yearning to begin a journey that would bring us to a new place and a new way of being different in a good way.

A month earlier, our older brother Harpal made the trip to Winnipeg, Manitoba. He was 16 and it was the first time he had journeyed alone on a jumbo jet and to the other side of the world. In weekly phone calls he spoke of the heat in August and how quiet it was in St. Norbert. The landscape was endless and flat and many people spoke French, English, and Hungarian.

We would come to know this place where it would go from unbearable Prairie heat to -40 in the span of three months; a place I learned that summer and winter retreats meant going to the family cabin (Claude’s family cabin in my case); tobogganing down the iced-over dam diversion tributaries, a first bite into a hamburger personified by a striped burglar, and my first-ever viewing of the Northern Lights.

Two years before, my Mataji Surjit Kaur and Ranjit Puaji had arrived in Walsall, from Winnipeg and spent some time with us.  My Mataji was desperate to reunite the whole family in Canada and missed my father so much. All of my father Mani’s siblings lived in Canada while my mother Gian’s family lived in Birmingham, Huddersfield, and Bradford. Our father had already secured immigration papers as a plumber to migrate to the USA, but his mother changed his mind and had her children draw up sponsorship letters that my Uncle Gian would eventually sign as the primary sponsor for our family of seven. That was a brave thing to do given it was the 1970s and Punjabis living in the West continued to be vilified.

As children, we thought we might be welcomed into a place, different from our lives in the industrial heartland of the UK, where racism was relentless. Our lives in the Midlands, England would scar our souls and minds from the early years of watching our windows egged, our pets poisoned, and sometimes our bedroom windows smashed; this was the home we left in 1979. This was the UK during the 1970s.

I remember how carefully and with painstaking detail my mother tried to load up as many meaningful photos, items, and some religious materials into these quilts and then tie them up in large spherical bundles; it was as if the meaning of life was being hauled away out of our home to be transported to another place.

The week before our departure, my mother and her four small children spent days packing our clothes and loading them into large sturdy navy blue beaten trunks that we had used on our journey to India some years before. In addition to this were two huge (well, from a 12-year old’s perspective) hand sewn Punjabi quilts my mother had made in the paternal village of Purtapura Punjab. I remember how carefully and with painstaking detail my mother tried to load up as many meaningful photos, items, and some religious materials into these quilts and then tie them up in large spherical bundles; it was as if the meaning of life was being hauled away out of our home to be transported to another place.

As we loaded into Uncle Yusuf’s van in the early hours, the night clung to the trees, roads and us, and a fog descended onto the drive way and roads. It was still around 4am and the only sound of cars was the echoing speed of cars on the motorway. We were packed into the van, and our two rejais (quilts) were perched under a tarp on the roof.  We drove a few hours and I was sitting facing out the back window of the van. I still remember feeling as if I was moving backwards towards a new life; as if the roads I was leaving were points of memory, regret, sadness, and yes, anger at what we were doing, and equally of a yearning towards a life better than what we had endured.

Our drive took us through the fog-shrouded roadways of London; even the great city seemed to be quiet and asleep as we funneled through to Gatwick Airport. Once we were there, Uncle Yusuf helped us all the way to check-in and up to the security gate. I still remember how odd it must have been for travelers to see a family of Punjabis with a mix of luggage and a man with broad shoulders carrying one loaded quilt on his shoulder while his other arm pushed a cart with battered luggage and a big quilt mushrooming over the wheels; and a wife with a beehive hair-do and a baby and three young children in tow.

We travelled to Canada through Wardair. Hours passed, and as kids we progressively became bored and wanted so much to leave the plane. By the time we arrived at Winnipeg International Airport, and exited customs, we walked into a deep wall of heat and dust, and I recall our Chachas Gian and Sohan were there to greet us. I recall.

Memory sometimes dislocates itself, breaks apart and becomes diffused into the ether.

My sense of minutes passing and the clock moving backwards seems to have been enveloped into the fog that is sometimes memory and I still can’t understand how we managed to leave the dawning fog in England and arrive into the hot blanket of heat on a hot autumn, late afternoon in Winnipeg. Memory sometimes dislocates itself, breaks apart and becomes diffused into the ether. Sometimes when one recollects the fragments and considers it in an adult light, the moment takes on another meaning and emotions of hope and regret mesh together; such is the nature of living in this world; such is the journey we all participate in as migrants seeking the inner life of meaning.

Phinder Dulai has given readings and talks on Canadian literature, with an emphasis on migrant voices, for schools, colleges, and universities both in and outside of Canada. He has worked in print journalism in Vancouver's South Asian media and as an associate producer for Gabereau Live. His poetry has been published in Ankur, Rungh, the Canadian Ethnic Studies Review, and the Toronto South Asian Review. Excerpts of his poetry have been featured in the Vancouver Sun and The Globe and Mail. Phinder published his first book of poetry, Ragas from the Periphery, in 1995, and has since published Basmati Brown (Nightwood Editions) and dream / arteries (Talonbooks). He currently works for the BC government and lives in Burnaby with his wife and two daughters.