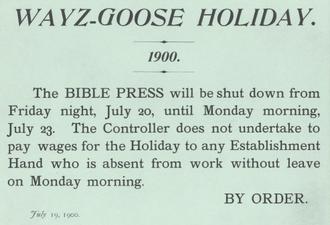 Autumn is nearly upon us, and while for most that means leaves, sleeves, and all things pumpkin-spiced, for those in the publishing biz it means WAYZGOOSE. Learn more about this silly word that, short answer, means “printer party”, and how it’s celebrated by modern-day Canadian printer-publishers.

Wayzgoose is defined by the Oxford English Dictionary as:

An entertainment given by a master printer to his workmen around St Bartholomew's Day (24 August), marking the beginning of the season of working by candlelight. In later use: an annual festivity held in summer by the members of a printing establishment, consisting of a dinner and (usually) an excursion into the country. Cf. earlier waygoose n. 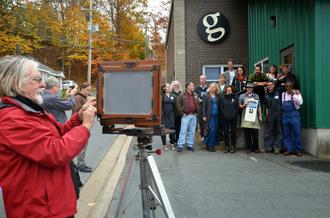 But why the word? Why the goose? Andrew Steeves, printer/publisher of Gaspereau Press in Kentville, Nova Scotia, tells us “the word refers to a goose fed on the stubble left in grain fields after harvest. One supposes that such a goose might often have been the centrepiece for the banquet.”

No stranger to Wayzgooses (Wayzgeese?), Gaspereau has been hosting one since 2000, an event that opens Gaspereau’s doors to the community for a Saturday each October for demos, tours, readings and talks. Each year, they invite guest printers – this years’ Gaspereau Press Wayzgoose hosts special guest printers Richard Kegler (Wells College, NY) and Amos Paul Kennedy (Detroit), among others – as well as authors. This year, the Gaspereau Wayzgoose will be held October 22nd – all are welcome!

Andrew also made mention of the Grimsby, Ontario Wayzgoose, which has been running for almost 40 years and boasts over 2000 attendees annually. Held on the last Saturday of April, the book arts fair brings together private presses from all across Canada and the United States. Porcupine’s Quill, another Canadian printer-publisher, are regular exhibitors. 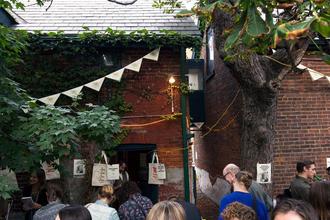 We at All Lit Up are currently recovering from yet another Wayzgoose that’s become a staple of the Toronto publishing scene: the Coach House Wayzgoose, which went down last night. Editorial Director of Coach House Books Alana Wilcox has to say of their fete: “The start of the new fall publishing season each year seems like a grand time to have a party – we like to think of it as a kind of back-to-school shindig for the writing and publishing crowd. It's a hot-dogs-and-beer-style informal start to a more buttoned-down few months, and it's great opportunity to see how books get made, catch up with friends and enjoy the dregs of summer.”

So, get those candles all lit up, fall publishing folks! It’s late-night printing time.

Big thanks to Andrew and Alana for sharing info about their Wayzgooses, and Wayzgooses in general, for this post.