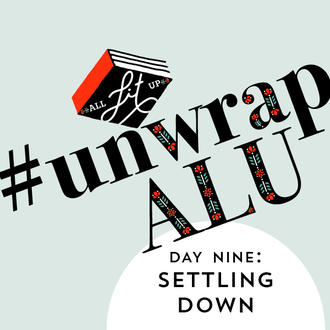 You've been following along all this time, so the day nine edition of #unwrapALU is all about deserving to kick your feet up after a life well-lived. One such life-liver is a circumnavigator who decides to cease circumnavigating, and befriends a fox while living in the woods in David Doucette's A Hard Old Love Amongst Scavengers (Thistledown Press). The other is a writer examining the life of Hollywood's Tarzan, Johnny Weissmuller, in sparkling novel-in-translation  Hungary-Hollywood Express (Vehicule Press).

Everyone has one – that tricky booklover on your list for whom you're stymied on what to buy. Fret no longer: we've rounded up twenty books for hyper-specific people. Check our recommendations, and buy on. BONUS: get a set of our  holiday gift cards FREE when you buy any of our featured books. 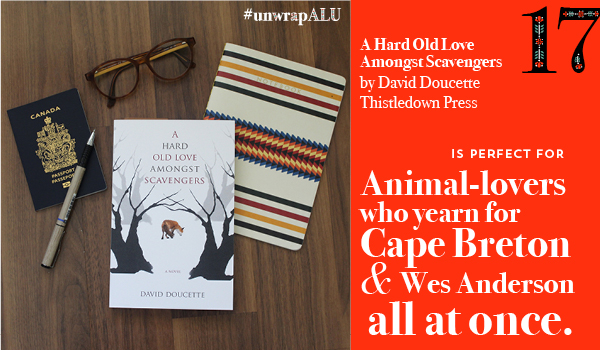 Cape Breton Island comes alive through David Doucette’s voice and musicality in his third novel, A Hard Old Love Amongst Scavengers. Ex-circumnavigator Miles MacPherson lives in an isolated cottage by the forest, and though he wishes to live out the rest of his life in peace and quiet, he seems to attract dramatic visitors. One such visitor is a small fox, who retrieves his golden reading glasses from the forest; the ensuing adventures shake loose Miles’ apathy and transform him. As this unlikely friendship grows, unbeknownst to Miles, a starved coyote pack lurks in the black spruce fringe of Smokey Mountain, one grown desperate and bold, one that has killed. In a series of anecdotal, vignette-like chapters, each concluded with lyrics of Doucette’s own songs that evoke the spirit of Cape Breton, A Hard Old Love bursts with character, humour, and thrills. 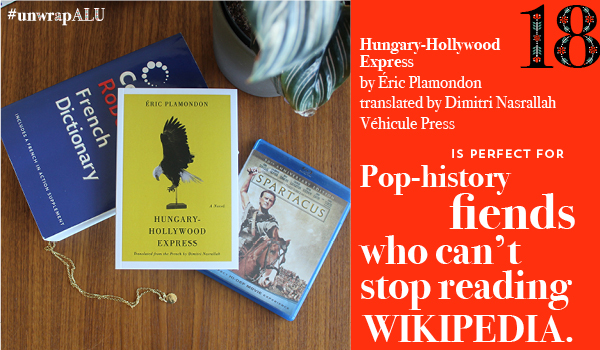 This novel celebrates America’s vibrant 20th century from the perspective of a writer living north of the 49th parallel.

When Gabriel Rivages recounts the life of Hungarian-born Olympic gold medalist and silver-screen heart-throb  Johnny Weissmuller (1904-1984) who played Tarzan, he brings to life a vibrant patchwork of America’s 20th century, from its athletic exploits to its literary underground, from its cinematic glory to its obscure failures.  Edgar Rice Burroughs sells pencil sharpeners,  Albert Einstein crosses paths with squirrel hunters, JFK becomes an airport, the world record for the 100-metre freestyle swim is broken, Tarzan saves Jane, a corrupt accountant runs away with the savings, the Second World War makes waves in Lake Michigan, and a living legend wraps up a storied career as a host in a Las Vegas restaurant.

This is Éric Plamondon’s idiosyncratic take on America and the beginning of this journey through 20th century modern American modern mythologies. Hungary-Hollywood Express is the first novel in what the author calls the 1984 trilogy. Mayonnaise and Apple S, the second and third volumes, focus on poet  Richard Brautigan and Apple founder  Steve Jobs respectively. Dominic Tardif in Voir Magazine called this book “A novel for the Wikipedia generation.” And you only have to read the first page of Hungary-Hollywood Express to understand this—it grabs you and you don’t want to put it down.

The publisher notes that: "this is a translation that does not read like a translation. This might sound like a defensive comment but it really reflects our unique approach of having Writers Translating Writers. We choose accomplished English-language Quebec writers (such as Neil Smith, Dimitri Nasrallah and Claire Holden Rothman) to translate the fiction of French-language Quebec authors. This is what Peter McCambridge said in Quebec Reads about Dimitri Nasrallah’s translation of Hungary-Hollywood Express: 'It is a massive compliment when I say that Hungary-Hollywood Express reads very much as though it was written in English.'"

Tomorrow is our LAST DAY of #unwrapALU recommendations: buy either (or both) of these recommendations,  or any of the others we've featured, and receive a set of our  holiday gift cards FREE to go along with your perfect present. 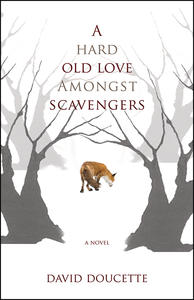 A Hard Old Love Amongst Scavengers