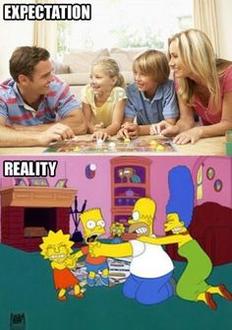 These Book Games We Play

In 2011, New York Times columnist Dwight Garner wrote about “the paperback game” – a literary version of Balderdash where players take turns imagining first lines of genre fiction books. We love a little friendly competition here at All Lit Up, and we’ve come up with some games to play with your own book collections. Be sure to let us know how they go (and don’t blame us if you play the third one, SVP).

In 2011, New York Times columnist Dwight Garner wrote about “the paperback game” –  a literary version of Balderdash where players take turns imagining first lines of genre fiction books. We love a little friendly competition here at All Lit Up, and we’ve come up with some games to play with your own book collections. Be sure to let us know how they go (and don’t blame us if you play the third one, SVP).

Books Against Humanity
4+ players, as many books as players
Plausibility of play: 4.5/5

For this book game, you’ll need an Apples to Apples or Cards Against Humanity game (you can download the latter for free here, but fair warning, it’s definitely NSFW). Ignore the “answer” cards, and instead focus on the “question” ones. Each player will also need a book of their choice, and you’ll need some kind of timer.

How to play: One player reads a question card to the group. The other players have one minute (set the timer) to find a word, phrase, or sentence from their book that they think is the funniest/cleverest answer to that question. They quickly write it down and pass it to the reader. The reader reads all of the answers aloud, and then chooses a winner. That winner keeps the question card as a point and then the player to the left of the reader reads the next question card. The player with the most points at the end is the winner. 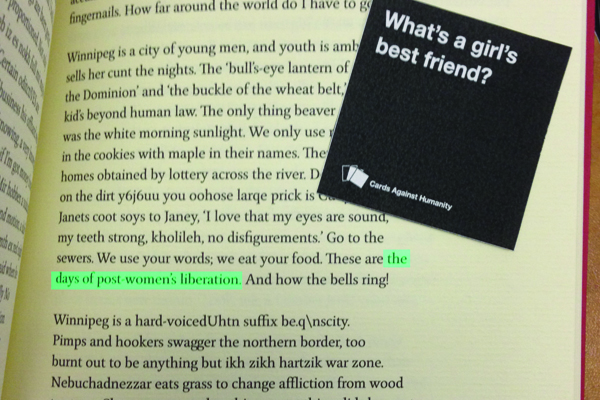 Book Jenga
2-4 players, a lot of books
Plausibility of play: 2/5

For this bookish spin on the classic, you’ll just need a lot of books – all 6x9” trade paperbacks if you’re a purist, or any trim size under the sun if you like a wacky Jenga game.

How to play: The first player chooses a book, reads a sentence or phrase at random, and then places it on the floor. The next players do the same, placing their books atop the one previously stacked. If the tower of books topples during a player’s turn (the turn is made up of both the reading and stacking portions, remember!), they lied about reading The Stone Angel in high school.

Bookskrieg
How many players and books have you got?
Plausibility of play: 0.5/5 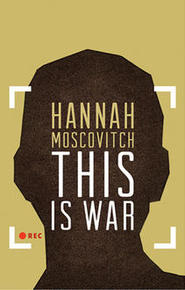 Just ask the Montagues and Capulets: everyone likes a good feud every once in awhile. For this game, assemble two teams of hardened literary warriors (and hard books, too).

How to play: Spend time building bricked fortresses out of your most formidable hardcovers (old textbooks are great for this). Remain huddled with your teammates there, sometimes for days on end, succumbing to trenchfoot, hunger, and all the terrible things conflict brings. When strategy dictates, attack the other team by throwing books or literary insults (e.g. If they lost Book Jenga, remind them of their failures to read The Stone Angel. Psychological warfare is key). This is a game of attrition, so it ends when all players from one side are eliminated from play/go home to pick up their kids and/or live their lives.

We also recommend reading Hannah Moscovitch’s play This is War (Banff Centre Press/Playwrights Canada Press). This harrowing drama about the psychological effects of war has a silver lining: the strong working friendship between the two publishers that brought the Trillium Award-winning This is War to life. Definitely something to keep in mind as your own friendships dash upon the rocks after a bout of Bookskrieg.