It’s TIFF time, and, as always, we can’t help but check out the awesome slate of films destined to grace Toronto screens without being reminded of great books that have a similar tone or theme. We’ve put together four Canadian picks for you to check out, plus added some additional bookish flicks for you to see if you happen to come festival-way.

It’s TIFF time, and, as always, we can’t help but check out the awesome slate of films destined to grace Toronto screens without being reminded of great books that have a similar tone or theme. We’ve put together four for you to check out, plus added some additional bookish flicks for you to see if you happen to come festival-way.

Short Film: Benjamin is about a doubly-pregnant lesbian couple, who, after the tragic loss of one of their babies in utero, plot to keep the other, at the expense of their friends they’d offered to surrogate for. On a much lighter note is the true story of Natalie Meisner’s Double Pregnant (Roseway Publishing), where Natalie and her wife Viviën begin a series of “dates” with potential sperm donors – with always hilarious, sometimes disastrous results, and inevitably heartwarming results.

Gala: Beeba Boys, directed by Deepa Mehta, follows Jeet Johar, an observant Sikh, devoted father, and ruthless gangster. He and his pack of loyal street toughs fight for supremacy of the Vancouver drug racket over the other Asian gangs in the area. In Chinkstar (Coach House Books), author Jon Chan Simpson’s protagonist, Run, finds himself in the middle of rap battles and gang warfare in Red Deer, Alberta. Much like Chan Simpson’s insightful question as to why people would find the idea of a Chinese rapper inherently funny, Mehta’s Johar steps outside of our stereotypical preconceptions of who a Sikh can be.

Special Presentation: Based on the novel by Jean Hegland, Into the Forest chronicles the struggle of two sisters – Nell (played by Canadian Ellen Page) and Eva – to survive in a remote country house after a continent-wide blackout. As supplies dwindle and intruders threaten their life, the question of seeing the next day becomes more and more stark. Likewise, characters Elena and Bern in Yvette Nolan’s play The Unplugging (Playwrights Canada Press) are relegated far from the remains of society after an apocalyptic event. They have to use their wisdom: traditional to survive, and present-day to decide whether or not to help those who cast them out.

Vanguard Film: The mockumentary No Men Beyond this Point imagines a world where women have become able to reproduce asexually, and moreover, that they’re only having girls. The film follows Andrew Myers – who at 37 is the youngest man on earth – as he begins an affair with one half of a couple he nannies for. As the other remaining men begin a revolt against the women-only government, the actions of Andrew and his lover, Iris begin to take on a much greater scale of importance. Brenda Leifso’s book of poetry Barren the Fury (Pedlar Press) envisions a much darker and more devastating battle of the sexes, where female fetuses, becoming cognisant of the horrors that await girls out of utero, decide to stop being born. The world that results as the population drastically dwindles is devastating to behold.

Additional bookish films to add to your TIFF roster: 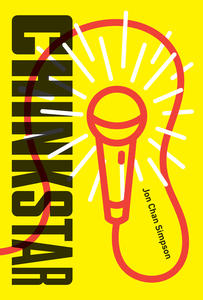 In Review: The Week of September 9th

August 27, 2019
Bingemas: For the Outcast Sympathizer