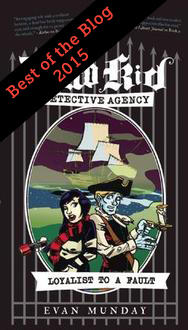 In my book series, The Dead Kid Detective Agency, our valiant narrator October Schwartz experiences not only great personal humiliation (after all, her nickname is “Zombie Tramp”), but any number of other more real dangers, like bayonet-wielding history teachers, phone-booth tippers, and, in the third installment, Loyalist to a Fault, homicidal ghost pirates.

The following list of my own real-life messes should demonstrate that at least some of October's mortifying misadventures were based on true events. Without further ado, I present your humble author's seven favourite embarrassing moments from his own school days.

September is just around the corner, and while over a decade has passed since I returned to any sort of schooling after summer, I can't help but continue to associate the month with all the typical back-to-school traditions: shopping for school supplies I probably don’t need (how many protractors can one boy handle?), class photos, and battling the utter dread of stepping foot into that roiling octagon of feelings, pressures, and hormones we have more simply decided to call “school.”

While many students across Canada worry about very real and devastating concerns  each school day, as a person who has lived a mostly (hashtag?) blessed existence, my personal dread at attending school had more of a whiny-baby “personal humiliation” vibe. In my book series, The Dead Kid Detective Agency (ECW Press), our valiant narrator October Schwartz experiences not only great personal humiliation (after all, her nickname is “Zombie Tramp”), but any number of other more real dangers, like bayonet-wielding history teachers, phone-booth tippers, and, in the third installment, Loyalist to a Fault, homicidal ghost pirates.

The following list of my own real-life messes should demonstrate that at least some of October's mortifying misadventures were based on true events. Without further ado, I present your humble author's seven favourite embarrassing moments from his own school days:

7) I once unintentionally called my seventh grade English teacher “Mom” in front of our entire class. Deep in the midst of a daydream – this being seventh grade, it may have been me imagining just how amazing Batman Returns was going to be – I was interrupted by Mrs. Freeman, and asked to do something or other. To which I muttered, “Okay, Mom.” The class found this hilarious, and Mrs. Freeman assumed it was my own personal brand of sarcastic in-your-face wit. This marked the first – and only – time I served detention.

6) Fifth grade was when I first noticed fellow classmates pairing up as couples. We once left school on a field trip to Ramsey, New Jersey’s Finch Park (formerly a landfill – this was New Jersey) during which, left unattended by teachers, those couples started totally making out. In no time, a kissing contest was declared, with some of the class’s most famous couples – like Brangelina, only they had compound names like Jimbin and Ashleth – battling for the gold. Whipped into a self-induced moral tizzy, I exclaimed, “If you all keep making out like this, someone’s going to have a baby!”, clearly demonstrating a razor-sharp knowledge of human reproduction.

5) Passing the atrium outside my high school cafeteria at any time could be an ordeal akin to crawling under barbed wire, but this was especially true during classes, when only the most cavalier rebel teens with no concern of absenteeism whatsoever would roam the atrium like insult-generating Roombas. One fateful day in ninth grade, I was sent to retrieve something from the office and ran into a much larger twelfth grader, who asked if I had $20. Pathologically unable to lie at the time, I admitted I did. He asked if he could see it, saying his friend and he had a wager about what was on the back of the $20 bill. So, being the most naïve former Jersey Boy in history, I produced a $20 bill from my wallet and PUT IT INTO HIS HANDS. You may have guessed how this story ends, but you probably haven’t guessed that I then tried to charm him into giving my money back for about five minutes – all while on the verge of tears – as he told me to get lost, but with far more expletives. Eventually a teacher walked by and he, worried that I’d squeal, gave me the $20 back. At the time, it was less “LOL. So embarrassing!” and more like utter, white-knuckled terror.

4) I’ve never known what to do with my hands while walking: they just swing out at my sides like nail-bitten dustpans. Up until partway through sixth grade I was a big proponent of walking with my hands in my pockets. I’m sure I’d seen someone cool, like Gambit from the X-Men or Brad Pitt in Cool World, do it. Then this older kid, Greg, came up to me in the hall and told me it looked like I was “playing with myself” when I walked around with my hands in my pockets. So, that ended that. (Though I'm pretty sure I had to ask someone what “playing with yourself” meant.)

3) Never much of an athlete, I spent much of high school in the music room. I played trombone in a few school bands (both symphonic and jazz varieties). During the winter high school music recital, I thought of a very clever way to add a little razzle-dazzle to a trombone solo scheduled during our jazz band’s performance. The audience of distracted parents were probably a bit confused as to why the trombone player’s arms were completely bound in masking tape as the band began their rendition of “Night Train.” And those same parents were probably not astonished and delighted when that same trombone player struggled, then succeeded to burst out of his tape bonds (metaphorically the artistic restraints society had placed on me, ’natch) to play a mediocre solo. I don’t think I was embarrassed by this shameful display at the time, but in retrospect, I really should have been.

Though, to be perfectly honest, this sounds like something present me would 100-percent do, as well. I have learned nothing. 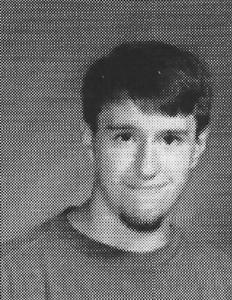 2) This yearbook photo (left). The time to experiment with facial hair is probably not just before the school photographer makes his annual visit.

1) Most of my adolescence was spent in orthodontics of some kind or another. I know countless childhood narratives have emphasized the embarrassment that is having braces – most recently Raina Telgemeier’s Smile. But despite having several rounds of braces, retainers (both removable and permanent), space maintainers, and – my favourite medieval torture device – the expander, I never thought of the braces themselves as embarrassing. However, my favourite embarrassing moment did involve my braces.

Freud has some very interesting theories on oral fixation that I won’t get into here, but suffice to say, I had an issue with habitually putting things in my mouth throughout childhood. During middle school, there was a phase in which this took the form of me chewing on the collars of my shirts. One day in math class, something happened that helped me kick that particular habit right quick.

While chewing on my shirt during a discussion of triangle congruence (or something), my shirt got caught on my braces. Somehow, one of the metal hooks snagged in my maroon long-sleeved shirt and would not let go. I attempted to raise my head, but couldn’t lift it from the position where it was, chin pressed into my chest. Of course, this is when my math teacher called on me to answer the question. I did, but she wanted to know why I wouldn’t look at her. That’s when I had to admit:

“I can’t. My braces are caught on my shirt.”

To which she reasonably replied, “Why was your shirt in your mouth?”

This was a much longer story that I couldn’t adequately explain.

Given no explanation for the shirt-biting, my teacher attempted to help me lift my head from my shirt in front of my fellow math students, but nothing would work. Those braces were really caught. Exasperated, she sent me to the school nurse. Several minutes in, the nurse discovered what my math teacher and I had already learned. I sat with my head downcast (as I literally could not move my head) as the nurse called my mother at work and asked if she could cut her son’s shirt.

I spent the remainder of the school day with a loonie-sized hole just south of my shirt collar, but I never chewed my shirts again. 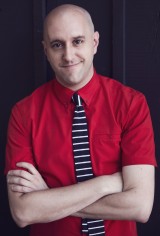 Evan Munday is the author and illustrator of the acclaimed book series for young readers, The Dead Kid Detective Agency. Both  The Dead Kid Detective Agency and its sequel,  Dial M for Morna, were nominated for the Silver Birch Fiction Award. The third book,  Loyalist to a Fault, will be in bookstores this September. He has also worked as a book publicist, freelance illustrator, ebook designer, and soda jerk. He lives and no longer chews his shirts in Toronto, ON. 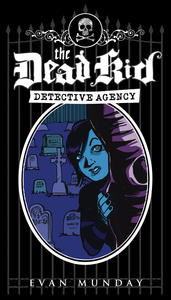 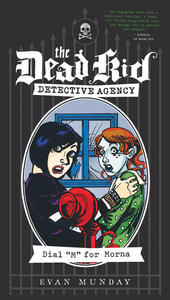 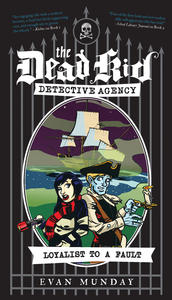 September 5, 2018
Back to School with The Wolf is Back