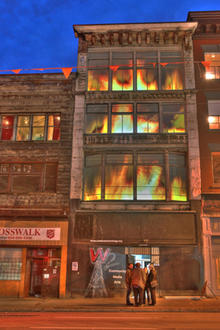 It took us about a month to get organized and another month to execute four weekly Wednesday night readings featuring a total of 44 writers most of whom, with a few generous exceptions, were published by small Canadian presses, or in Canadian journals. There were other writers who published themselves, like Chris Walter and his GFY Press, and still others whose work was too new.

We arrived very quickly as an independent, grassroots reading series.

It took us about a month to get organized and another month to execute four weekly Wednesday night readings featuring a total of 44 writers most of whom, with a few generous exceptions, were published by small Canadian presses, or in Canadian journals. There were other writers who published themselves, like Chris Walter and his GFY Press, and still others whose work was too new.

We arrived very quickly as an independent, grassroots reading series.

We had a venue, a microphone, a couple of cameras, some chairs, and a community of volunteers and fans of local literature who rose to the occasion and made it happen.  Any city that hosts an Olympic Games is contractually obligated to become a brochure of itself. The rough edges are sanded down, the unruly elements are met by officers on horseback, the culture of the city is suddenly represented by celebrities imported from big foreign cities playing big venues to big crowds and cameras.

The real in our name refers to Vancouver, our complicated city. We took that name back in a sense, even though it’s not really ours to possess. It’s a subversive and mercurial “real” that exists in our name, it’s not something that you can touch or point to, it’s an essence or the spirit within the thing, within the city, the people, the act of literary creation that we hope to capture and show.

Though we have little in the way of greater resources than we had 5 years ago we have put on over 20 events and featured more than 120 writers, the great majority published by Canada’s independent presses. Our partnerships and collaborations with publishers, literary organizations, writers, and other people in the arts continue to help us bring a sense of energy and conviviality to readings 4 or 5 times a year.  This is our story so far.

Real Vancouver was born in a burning building. 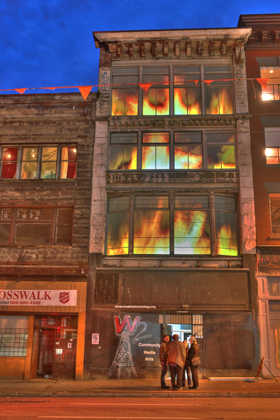 The flames that licked the windows of the top three floors of the W2 Culture and Media House (pictured) were digital projections on an endless loop. The installation was created by Quebec artist Isabelle Hayeur and titled Fire with Fire. It was a radical moving image that seemed to critique the Olympic flame and the rush of gentrification through the neighborhood. It signified the destruction wrought by unchecked cultural appropriation and commercialization across unceded Coast Salish land.

On the evening of Wednesday February 3rd, 2010, Richard van Camp stood at a microphone that was held to its stand with duct tape on an improvised stage in the historic Perel Gallery at the W2 Culture and Media House, located on the legendary 100 block of West Hastings Street in Vancouver’s downtown eastside, and spoke the very first words that any writer will ever say in the history of the Real Vancouver Writers’ Series.

It was the beginning.

We never had an expectation that we’d still be doing this. We had no idea what would happen that first night or the next week or the week after that.

We didn’t know whether anybody would show up.

I mean, how does a grassroots literary reading series that had never existed before that night, populated by writers whose books had mostly been published by Canada’s independent presses, compete against the Olympic Winter Games?   We didn’t know and we didn’t care.

The only thing that we knew for certain was that amid the howling madness of the Olympic Games, with its suffocating corporate overlay, the international media, the clusters of uniformed athletes, handlers, and fans, the palpable excitement, the parties, protests, and marches, that we were going to put on the best shows that we could with the best local writers that we could find.

Over four Wednesday evenings in February 2010 the Real Vancouver Writers’ Series brought together 44 local writers from across a huge spectrum of sensibilities, styles, genres, identities, and histories. We livestreamed each event across the web to the world. We worked hard to engage with people via social media, to get the word out through the grassroots channels.

We wanted to connect.

And we did.  That first night we had a respectable crowd in the room but the word-of-mouth enthusiasm and photos taken from that night shot through the community like fire in dry grass.

The next week Real Vancouver was standing-room only. The week after that we competed with the broadcast of the epic Canada vs. Russia hockey game, and we still filled the room.

The literary community of writers, publishers, readers, and fans rallied in that moment and showed the city, the country, and the world the breadth and quality of work being produced here.

Representing for the craft of independent publishing is built into the DNA of the Real Vancouver Writers Series. We believe in the work they do, in the voices they cultivate and nurture, in the independent aesthetic they bring into the world.

When I look back on the list of writers that have participated in Real Vancouver over the years, it is replete with writers working with Canada’s independent publishers:

These are just some of the presses that RVWS has supported through showcasing their writers on stage, in front of live audiences, over the last five years. 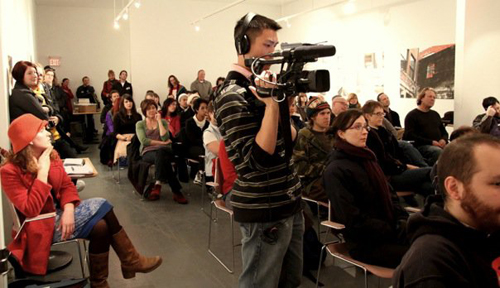 Some time in early 2012 Dina Del Bucchia came on board to co-host Real Vancouver and eventually joined me as co-Artistic Director. Together with loyal volunteers like Liisa Hannus, Heidi Schiller, and others, we put on events and curate projects that connect the Vancouver writing community to the rest of Canada, and the world. We collaborate with some of the finest literary groups in the country as well as internationally. We coordinated the inaugural Giller Light Bash Vancouver and partnered with the Griffin Poetry Trust for the Griffin Vancouver event, where we broadcast the ceremonies live from Toronto and then livestreamed our own reading featuring Evelyn Lau, Matt Rader, Zaccheus Jackson Nyce, and Gillian Jerome.

We also collaborated with the UK’s Ministry of Stories to participate in the 24 Hour Book Project writing and publishing an entire novel with teams of writers from London, Delhi, and Kuala Lumpur in a single day.

The series has continued to grow and attract new collaborators but our essence has always been to showcase writers published by Canada’s independent presses.

On Wednesday February 24th 2010 Hal Wake, the Artistic Director of the Vancouver Writers Fest introduced then-Vancouver Poet Laureate Brad Cran as the 44th and final reader at the Real Vancouver Writers’ Series, Olympics Edition. Our exhausting four week literary sprint was coming to an end. Brad read a few of his own poems and then finished off his set and the Olympics Edition of the Series with a recitation of Al Purdy’s classic poem, “Say the Names”.

The poem is an homage to memory and the disappearance of people, places, and names from across our physical and psychic landscapes. It challenges the reader to consider the evocative power of those names and places. What do they mean? Will they disappear, too? If so, why and where to? What do we hear when we say the names, and what is the sound of our past, present, and future?

The city of Vancouver is built on unceded Coast Salish Territories. We are the guests of the Musquem, Squamish, and Tsliel-Waututh Nations. It is only through their generosity as hosts that we are able to do our work and live on this land.

Not only was the city of Vancouver a symbol of colonialism by its very existence but in February 2010 the corporate overlay of the International Olympic Committee, with its signature sporting spectacle, and the suffocating presence of so much corporate sponsorship, brought with it a kind of itinerant and highly localized colonization of mind and place.

It was at this time that the Real Vancouver Writers’ Series was created as a response to the international corporate culture that accompanies the Olympics to any city that hosts them but also as an acknowledgement of our place on the map. We represented Vancouver and the voices of our great literary creators who lived and worked here before, during, and after the Olympics. We were not content to allow our city to be characterized merely by gleaming glass buildings, unfinished condominium towers, and pristine mountain peaks capped by manufactured snow. 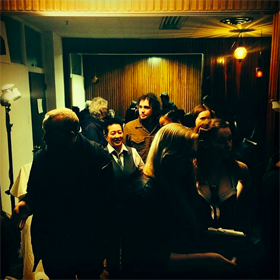 The voices and writings published by local independent presses were the fuel that propelled the Real Vancouver Writers’ Series in its earliest days and continues to sustain us now.  Canadian independent presses are the direct line between urgent writers producing challenging local work and the audiences that crave their words. Without independent publishers willing to take a risk on interesting, talented writers our national culture would be poorer.

And without those presses and the amazing writers that they bring to the country and world Real Vancouver would not exist and would never have been able to feed the imaginations of audiences these past five years. 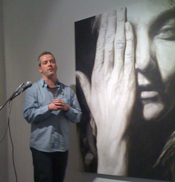 Sean is a lifelong independent bookseller, the creator and host of Books on the Radio, curator and co-Artistic Director of the Real Vancouver Writers' Series, and a communications consultant working with arts and literary groups across the country.

Sean was given the 2010-2011 Literary Promoter and Organizer of the Year Award from Pandora's Collective for his work with Real Vancouver during the Olympics. He also served on the Steering Committee for the National Forum on the Literary Arts that happened in Montreal in winter 2014.

When he is not working hard in the literary community Sean is the General Manager of the legendary Storm Crow Tavern.

You can find out more at seancranbury.com