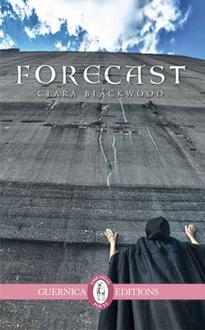 George Fetherling has been publishing his poetry since the mid 1960s. You can't be more qualified than that to be a senior poet selecting a new poetic voice for Poetry Month. Like Fetherling, Clara Blackwood is also a poet and visual artist, in addition to being a tarot card reader.

George Fetherling has been publishing his poetry since the mid 1960s. You can't be more qualified than that to be a senior poet selecting a new poetic voice for Poetry Month. Formerly of Toronto, Fetherling is now based in Vancouver, where he continues to write poetry, in addition to fiction, non-fiction, cultural commentary, and creating visual art. Among his many books are Travels by Night (Quattro Books), Walt Whitman's Secret (Random House), Singer, An Elegy (Anvil Press), and The Sylvia Hotel Poems (Quattro Books).

Fetherling's selection for a strong emerging poetic voice is Clara Blackwood. Like Fetherling, Blackwood is also a poet and visual artist, in addition to being a tarot card reader. Her first collection, Subway Medusa, was published by Guernica Editions in 2007, the inaugural book in their First Poets Series, featuring first books by young poets. More of her poetry can be found in various Canadian and international journal as well as in her sophomore collection, Forecast, published by Guernica last year.

Read on for a poem from Forecast.

George Fetherling on why he selected Clara Blackwood:

The first name of Clara Blackwood, the Toronto poet, is indeed Clara but her surname is borrowed from that of Algernon Blackwood (1869─1951), a prominent author of ghost stories and weird tales. He was a member of the infamous Hermetic Order of the Golden Dawn, a cult derived partly from both the Rosicrucians and the Freemasons that held a great attraction for many authors in the last years of the nineteenth century and the first years of the twentieth.

Clara is herself not a cultist but like Gwendolyn MacEwen, the late Canadian poet to whom she frequently refers, her work deals with mysticism, symbology, and edge spirituality as they apply to contemporary urban feminism.

Urban is one of the key words.

Her first full-length poetry collection (Guernica Editions, 2007) bore the perfect title, Subway Medusa—perfect because it encapsulates the search for spiritual understanding in a world of bleary-eyed po-mo bohemians who fill the nocturnal streets, bars and all-night coffee spots, trying to find a tradition, or to make one of their own, in a monolithic money-mad city that does not acknowledge their intimacies and confusions.

As she writes in one poem: “Why these shadowy figures hovering / on the periphery, and what do they want? / The past, the present and the future in collusion. / Rain clouds descend once more: / all we see is unutilized darkness.” What the reader learns from Subway Medusa is expanded on, ripened and deepened in her collection Forecast (Guernica Editions, 2014). There are many reasons to value both these books highly. I do so because Clara Blackwood seems to me to be a type of downtown soothsayer and haruspex—a late-night Yonge Street priestess. 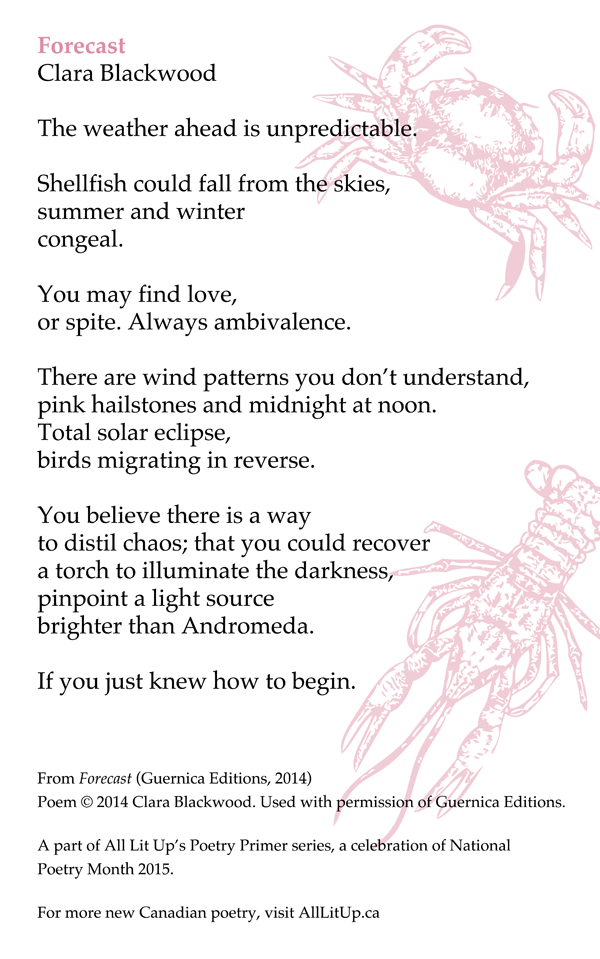 Clara Blackwood on why she writes poetry & who her influences are:

I write poetry for reasons that are beyond me; it was never a conscious choice, and the reality of writing is one toward which I have considerable ambivalence. I am a big believer in archetypes. Whether or not one even “believes” in them, I think they are powerful psychological patterns at work in our minds. I liken my enmeshment with poetry to the Persephone archetype. She was a naive maiden like myself until Hades (the dark muse) chose her against her will and took her to the underworld. The underworld here being the unconscious where poetic inspiration is drawn. Another aspect of the underworld is the literary community itself, with all its exercises in shadow play.

After this apparent lack of choice, the Persephone poet must continue to journey through the underworld – the source her inspiration for writing – and bring back the material to the ordinary waking world. That's how it feels for me. I have always felt drawn to the Persephone archetype the most out of all the feminine archetypes, and it has struck me as a metaphor for being “chosen” to write poetry, and for the ongoing creative journey. The writing of the poetry itself is a journey towards wholeness and vision where I try to unite opposites of dark and light within (as Persephone must) while also hoping to reach others and (ideally) have them also feel a soul-impact from the work. I imagine that those I perceive as the more cerebral-dominated types, say Athena archetype poets (unlike intuitive-dominated Persephone), would not feel themselves to be so close to the perils of the underworld. The Persephone poet tends to have a fragile ego structure whereby contents of the unconscious can flood the imagination and emotions and lead to being easily overwhelmed. It is good for creating a certain kind of poetry, but not so good for staying grounded in the day-to-day world with all of its practical concerns. At times I have tried to bypass destiny and avoided the writing altogether, since the process of journeying to the underworld can be frustrating, disorienting, and risky.

One of my favourite poets to this day is Sylvia Plath. She is definitely a writer who lived the Persephone archetype in her work and life. Her underworld-laden imagery has always spoken powerfully to me, and I aspire to create and evoke the same kind of richness and startling metaphor – but certainly not to follow the sad example of her life, which I take as cautionary.

Another poet who influenced me early on and I always go back to is Gwendolyn MacEwen. Her visionary imagination continues to enthral me, and the mythic and archetypal lives and breathes in her work in a highly intimate way. She probed the depths and brought back the jewels from the underworld to dazzle and astound us.

The best-known parts of the Persephone story are dark and troubling. But the underworld is rich with metaphoric wealth, supernatural power, prophecy, and real wisdom. Great territory for compelling and hypnotic poetry. And when Persephone emerges from it, Spring returns to the earth.

Can't get enough National Poetry Month? Don't forget we have buttons and magnetic poetry available in our merch shop!