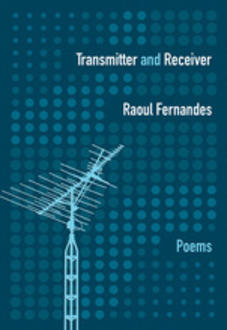 The award-winning, multi-talented author, poet, professor, and songwriter Patrick Friesen headlines our fifth Poetry Primer instalment. Friesen's personal experiences growing up in a small Mennonite community in Manitoba, and his subsequent distancing from that community, influenced powerful works like Blasphemer's Wheel, winner of the Manitoba Book of the Year, and  A Broken Bowl (Brick Books, 1997), nominated for the Governor General's Award of that Year. His recent collection of poetry,  A Dark Boat (Anvil Press, 2012), combines his twin loves of music and poetry through the influences of Spanish "cante jondo" ("deep song") and Portuguese "jado" – songs of longing.

Patrick Friesen gives his established poet nod to former student and emerging poet Raoul Fernandes. An active member of several poetry communities, Fernandes has already gained much acclaim, winning the 2010 Sakura Award at the Vancouver International Cherry Blossom Festival's Haiku invitational, and named a finalist of the RBC Bronwen Wallace Award for Emerging Writers that same year. Fernandes' first book of poems,  Transmitter and Receiver (Nightwood Editions), releases this spring: it's an introspective look at our relationships with ourselves, each other, and the tools we use to communicate.

Question your own relationships with an excerpt from Transmitter and Receiver, below.

Patrick Friesen on why he selected Raoul Fernandes:

Moving between a few prose poems and medium-length line poems, Raoul creates his own voice, a voice of heightened conversation. You wish people spoke that way, but they don’t. They could. The rhythms are drawn-out but tightened by a skillful balance of talk and precise image. The images are sometimes startling and unexpected. Raoul also occasionally employs unusual word orders making the reader see/hear the line a little differently. It feels as if his voice is on the verge of finding another texture, a deepening, but that may simply be an air of anticipation, as if one is watching the headlights of a car appearing and reappearing as it approaches on a hilly road.  What could arrive is danger. 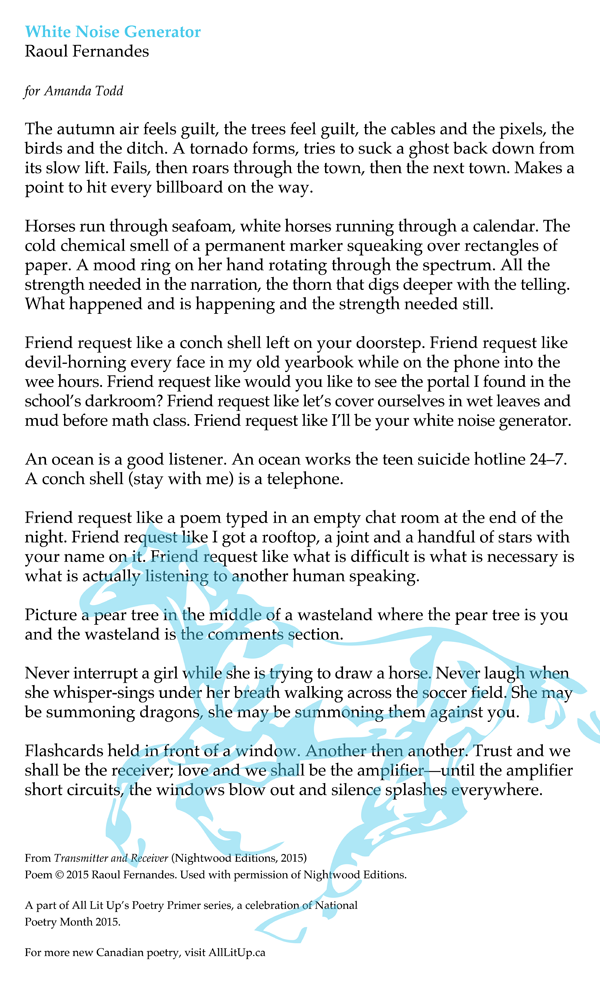 Raoul Fernandes on why he writes poetry & who his influences are:

Lately I've being seeing it in this somewhat romantic scene. Imagine a faint sound of distant bells coming over some hills. Some of the villagers don't care for it much. Others hear it and just enjoy it. And some are taken by this irresistible compulsion to become bell-makers. Or just want to be involved in the music. Something inside them resonates at the frequency. They get weird and dreamy about it.

Less romantically, I think I often feel how inadequate words are to communicate some thoughts and ideas. How much it falls short. And though poetry fails too, it is very mindful of this impossibility and even points to the impossibility sometimes. It distresses and shapes meaning in order to reveal glimpses of something real and profound and unable to be said any other way. There's something I find really lovely in being able to do that with small marks on paper.

My first Creative Writing teacher, Patrick Friesen, gave me one of my first books of poems, Rilke's Dunio Elegies. I found it difficult at the time but it showed me the heights that poems can reach. Before that I was mostly getting my “poetry” through songs and lyrics (a collection of poems by Patti Smith was another of my first poetry books). I went through other phases. A tough no-frills Bukowski phase. A surrealist Richard Brautigan phase. A haiku phase with a lot of the old Japanese poets like Basho and Issa. I was really taken by the sensitive straightforwardness of the Canadian poet, Alden Nowlan. There were a lot of American poets: Gerald Stern, Frank Stanford, C.K. Williams, Charles Simic. Now I am in more of a community, I read a lot of my peers and the books they slide across coffee tables towards me.

Follow along with our  Poetry Primer series all April long or get the full collection of featured poetry plus a poem from each of our established poets in our new chapbook,  ibid. Get a free ebook copy if you buy a collection of poetry from All Lit Up during National Poetry Month. 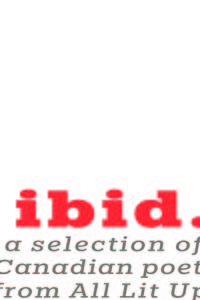 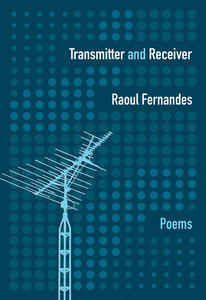 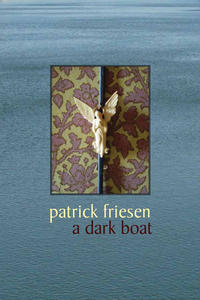 In Review: The Week of April 16th