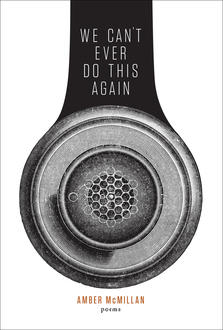 Catherine Graham has published five collections of poetry and has become known for dealing with the subjects of grief and remembrance with grace and beauty. When she is not writing poetry, she teaches creative writing at the University of Toronto School of Continuing Studies and the Creative Book Publishing at Humber College. With her teaching background, Catherine is no stranger to evaluating emerging voices. When we asked her to select a junior poet for us to spotlight this National Poetry Month, she picked fellow Wolsak & Wynn poet, Amber McMillan.

Catherine Graham has published five collections of poetry and has become known for dealing with the subjects of grief and remembrance with grace and beauty. Her latest collection, Her Red Hair Rises with the Wings of Insects (Wolsak & Wynn, 2013), marked a divergence from these themes, turning instead to tribute and exaltation. It garnered her the IFOA Poetry NOW competition top prize and a nomination for the Raymond Souster Poetry Award. When she is not writing poetry, she teaches creative writing at the University of Toronto School of Continuing Studies and the Creative Book Publishing at Humber College.

With her teaching background, Catherine is no stranger to evaluating emerging voices. When we asked her to select a junior poet for us to spotlight this National Poetry Month, she picked fellow Wolsak & Wynn poet, Amber McMillan. Amber's first collection, We Can't Ever Do This Again, is being published almost as we speak (the Toronto launch is happening May 7th at the Monarch). While this is her first collection, the West Coaster has previously published poems in several literary magazines, including The Puritan, CV2, and subTerrain.

Catherine Graham on why she selected Amber McMillan, or Blown Apart and Cobbled Back:

After the Toronto launch of Todd Swift’s When All My Disappointments Came at Once, a book I edited, I had a long and stimulating conversation with Amber McMillan about our poetry journeys. I mentioned completing an MA in creative writing in poetry while living in Northern Ireland and she immediately shared her knowledge of poets from there including Paul Muldoon, Seamus Heaney, and Michael Longley. When she mentioned Longley’s name her face lit up. Not only is he her favourite of the Northern Irish poets but of all time. Also an admirer of Longley’s work, I warmed to her passion.

Given this aesthetic connection I was curious to see what her poems were like. Soon after, I began encountering them in literary journals such as The Rusty Toque, The Puritan, and The Humber Literary Review. I read on Facebook that Wolsak & Wynn was to publish her first book under their imprint Buckrider Books, so I knew my long-time editor, friend, and fellow poet Paul Vermeersch was a fan of her work.

I’ve since had a preview of McMillan’s soon-to-be published We Can’t Ever Do This Again. The poems—so tightly controlled by language, music and meaning—hum electric and punctuate silence like a plucked instrument. They hold life’s extremes with a cool even tone and occupy the charged moment when fight meets flight and tragedy meets comedy. Love and loss are “doled-out equally.” “I can picture the world being blown apart too, / and then cobbled back together again.” They hint at what’s to come by embracing what is. And like all strong poets, she trusts her reader to take the next step:

I expected you to be a teenager, his breath hot
on my face, and the small wet debris from
the inside of his mouth dampened my cheek.
My turned cheek. My half-cheek. My halfway
in and halfway out cheek, cocked at an intimate
angle meant to encourage him to keep talking,
but to talk to me slowly, to drop his voice
to the lowest, most private register possible.

She has a terrific knack for titles: “The Dramatist and His Dialogue with the Devil,” “God’s Whip,” “Happy Belated World Accordion Day,” and “The Light I’ve Seen in Your Hair I Have Found in My Own Hands” (probably my favourite) and plays cheekily with sequence in a series of unordered sonnets. McMillan’s poems are of a dark, spikey nature and belong to a category I call the edgy lyric.

Like the “blind kid” in “Variant C” “who comforted himself daily with a dial tone,” I was strangely comforted by her take on the odd and mysterious lodged in the everyday. These spell-binding poems made me listen, proving “the exchange is working.” It all boils down to voice, that elusive golden quality emerging poets crave; something that can’t be taught. McMillan’s poems have it, a captivating, consistent, unstoppable voice:

I am encounter and recorder of civic natural order,
employer and mourner of every private corner. 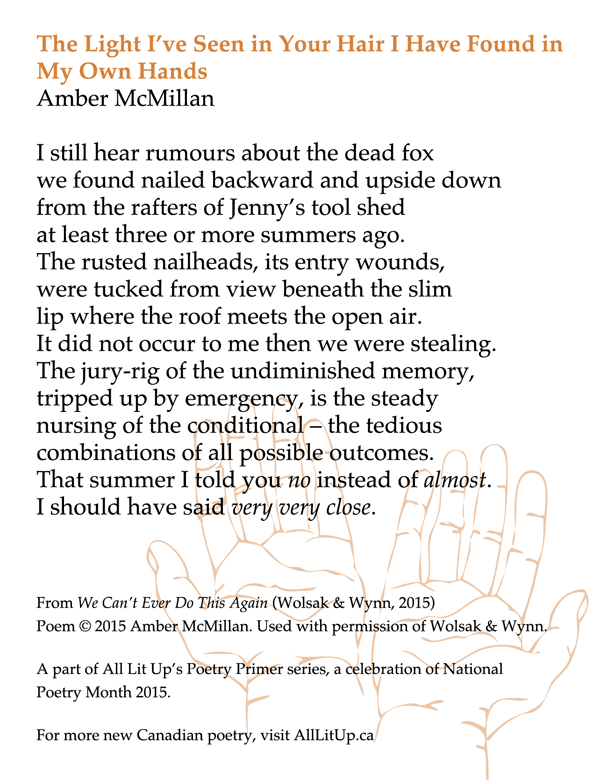 Amber McMillan on why she writes poetry & who her influences are:

I find the particular organization of words and line-lengths and other formal constraints of poetry to be the kind of restrictions I need to make something I like or am proud of. The poems I write are small, no more than 50 lines, but usually less than 20 lines, and the lines are short and only scan maybe 10 or so beats per line. These are short poems, and because of this, the task I’m committing to when writing them, is made that much more confined when I think about language and rhythm for the lines.

I've often wondered if unmitigated creative freedom could be a hindrance to art, an obstacle to overcome. My personality is one that feels some comfort and control when the parameters of a thing (anything) are more or less knowable, and I don't think it's different when I think about writing poems, which has something to do with scale and manageability. For example, a poem, even a "long poem," is a markedly small thing to look at when compared to, say, most novels, and that smaller scale allows me to imagine I can conceivably bang something out, can take a position on something small, such as a tree branch or the weather. The hope is that enough of these small positions come together in a coherent collection to mean something fuller than its parts: can uncover the metaphors that inform the project as a whole.

The question of influence has always been a tricky thing to take responsibility for. I have favourite poets or books that I return to regularly, the same ones for years, but I've also found that reading newspaper articles or eavesdropping on others' conversations is equally or more influential to me than anything else. For instance, the place I work at right now is frequented by an older Iranian refugee who comes in and tells stories about his life in Iran and having to escape to Canada to avoid being killed for his beliefs about women’s rights, stories about his childhood, stories you wouldn’t believe. Things like that make me think: how is there not at least a poem in this?  All of this really has to do with trying to work something out about the world so as to gain some understanding of it. It’s one way, among many ways, of solving a problem.

Less than two weeks left to get your hands on our special #NPM15 merch! And catch up on all the previous Poetry Primer selections here. 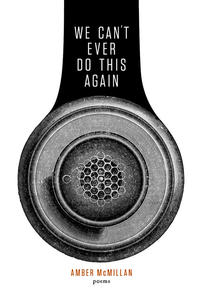 We Can't Ever Do This Again 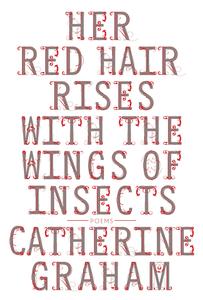 Her Red Hair Rises with the Wings of Insects

Poetry in Motion: Sheniz Janmohamed + Reminders on the Path