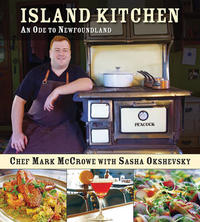 On the Water’s Edge

The most Easterly place in Canada is just a short drive from St. John’s, NL, which seems as good a place as any to start our literary libations tour. At 310 Water St, one of the main drags of the old town, you’ll find Chef Mark McCrowe’s Aqua Bar. McCrowe has been featured on Food TV’s Chopped Canada and his cookbook, My Island Kitchen (Creative Book Publishing), serves up recipes for authentic Newfoundland food and drink. I suggest a Caesar, which comes garnished with a prawn!

Avonlea was the fictitious name that PEI author, Lucy Maud Montgomery gave to Cavendish in her most famous novel, Anne of Green Gables. And while you might be hard-pressed to find a glass of Currant Wine (aka “Raspberry Cordial”) anywhere in the village proper, the wines in Piatto Enoteca’s cellars are sure to be some of the nicest you ever drank. You can find them on Route 6, just down the way from the Green Gables properties.

A Writer’s Residence at the University of New Brunswick

At the age of 16, poet, playwright and novelist Alden Nowlan discovered the regional library. To his poor, rural Nova Scotian family, education was discouraged as a waste of time. Each weekend he would walk or hitchhike 18 miles to the library to get books, and secretly began to educate himself. "I wrote (as I read) in secret."

His education paid off, and after winning a Governor General Award for Poetry in 1967, he was appointed the University of New Brunswick's writer-in-residence from 1968 until his death in 1983. During that time, he lived in a modest home on Windsor Street, along the edge of campus. In 2003, it was converted into the home for UNB's graduate student society and now houses the Windsor Castle Bar. Stop in for a pint, then meander about 15 minutes north-west of UNB to say hello to the folks at Goose Lane Editions, one of Nowlan’s publishers and a proud LPG member.

To find the literary heart of Ottawa, hit the Manx on a Saturday evening for Plan 99. You’ll certainly see poet/series founder David O’Meara and friends – which might just include local publishers and poets rob mclennan and Christine McNair of Chaudiere Books.

Get Stationed in Port Hope

Part of Jane Urquhart's Trillium Award-winning novel Away, which sensitively traces the immigrant Canadian experience, is set at the Canada House B&B at 168 King Street in Port Hope, ON; a town that in the 1840s was an important drop-off point for thousands of impoverished, often cholera-infected Irish settlers.

After you’ve taken in the waterfront, walk north on Queen, along the river, and you’ll pass the local library, a vibrant literary hub, before finding yourself at the Station Pub for a pint.

The rooftop bar of the Park Hyatt, where authors and editors once held court on their expense accounts, might be the better-known Toronto literary landmark, but the Library Bar at The Royal York Hotel is the only place to you’ll find Margaret Atwood's Margarita or Michael Ondaatje's Brandy Fix. Recently, a new slate of cocktails were introduced in honour of Joseph Boyden, Douglas Coupland, Robertson Davies, Yann Martel, Alice Munro, Mordecai Richler, and Gabrielle Roy. Cheers to that!

A Black Swan on the Avon

Visiting Stratford during the festival is something everyone should do. For the past 60 years, the village has celebrated Shakespeare and the dramatic arts. In the early 1950s, seeing the economy of his home town endangered by the withdrawal of the railway industry that had sustained it for nearly 80 years, Tom Patterson conceived the idea of turning Stratford into a cultural destination by mounting a theatre festival devoted to the works of William Shakespeare. In addition to acclaimed productions of the best in operetta and musical theatre, it has also showcased – and in many cases premièred – works by outstanding Canadian and other contemporary playwrights. Raise a toast to the whole cast and celebrate some Ontario Craft Beer at The Black Swan Brewery at 144 Downie Street.

Crave a glass in Regina

The historical Assiniboia Club at 1925 Victoria Ave now houses Crave Kitchen + Wine Bar. If you're lucky and it happens to be a Monday late in the month, you might stumble upon the  Vertigo Reading Series, a monthly event featuring words and music by local artists. If you’re unlucky, you might spot the restless spirit that is said to haunt the property.

Warehouse District holds much to discover

Scotiabank Giller Prize-winner Lynn Coady calls the warehouse district, and specifically the area around 104th Street and Jasper, her "favourite corner in Edmonton" in Avenue Edmonton. So after stopping in at TZiN Wine & Tapas for a glass or two, pop by the City Market to do some book shopping and author spotting - keep your eyes peeled for the Hellgoing author!

The Future home of the Jim Deva Tribute

If you stop by the corner of Davie & Denman streets in the near future, you will likely find a nod to long-time Vancouver bookseller and LGBT activist, Jim Deva. Deva was a long-time owner of Little Sister books, who passed away in late-2014. Drop by the Three Brits Public House on the south corner for a pint and some people-watching, then sidle on down Davie and pop into Little Sister to show your support.

The Downtown Hotel is home of the Sourdough Lounge, purveyor of the Sour Toe Cocktail. This is a bizarre Dawson City tradition that involves an amputated human toe preserved in salt, which is ceremonially used in a drink. The saloons of Dawson City, and that is that they are located down near the river. The Berton House writers’ retreat, on the other hand, is on the other side of town. Bundle up - the home stretch up to 8th Ave is all-uphill and sure feels like a struggle at the end of a night. Might be a good place to end this journey.

See the whole tour below, on Google Maps.

June 27, 2019
Where in Canada: The healing water of the North Mountain