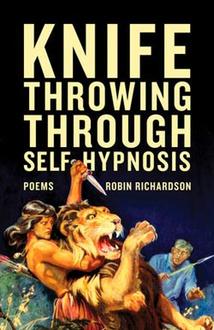 The first poem in our Poetry City project for National Poetry Month 2014 comes to us from ECW Press and takes us to Yellowknife in the Great White North. To poet Robin Richardson, the cold landscape is "filled with a far-off hope and hard-earned riches."

The first poem in our Poetry City project for National Poetry Month 2014 comes to us from ECW Press and takes us to Yellowknife in the Great White North. To poet Robin Richardson, the cold landscape is “filled with a far-off hope and hard-earned riches.” 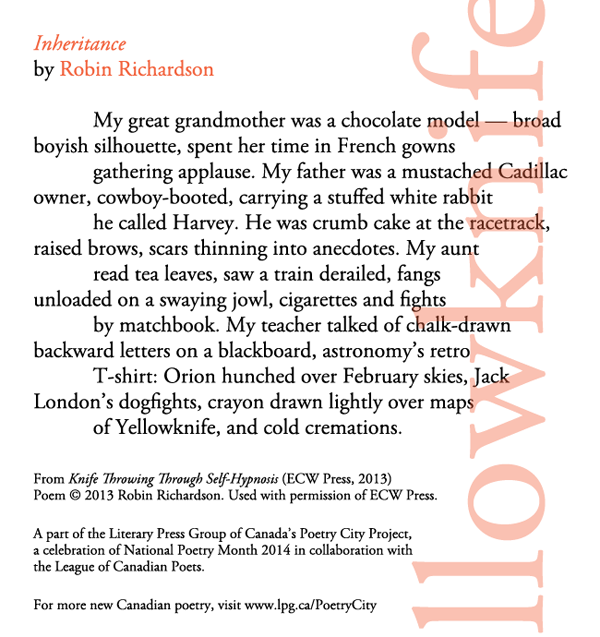 "Inheritance" is a poem about origin and childhood. The collection as a whole is an exercise in memory and perception, in which I take the bits and bobs of the world, real and fictional, that resonate with me, and fashion them into something new, maybe a bit truer, according to the way my perception alters them. Inheritance serves as a background poem, providing a glimpse into a few of the elements that informed these ways of perceiving in the first place.

The settings in the poem, particularly Yellowknife and the Great White North in general come, not from any hands on experience I've had there, as I've had none, but rather out of a grade four class, in which they factored heavily. My teacher's name was Mrs. Dorie and she was a huge Jack London and Robert Service fan. She read us Call of the Wild, and The Cremation of Sam McGee, and set my mind wandering around those cold, hostile landscapes, filled with a far-off hope and hard-earned riches. These themes resonated with me, fit into that period in my life symbolically on some level I suppose. It was a difficult year but I was optimistic. Northern Canada seemed to fit well with that feeling.

There are strange things done in the midnight sun
By the men who moil for gold;
The Arctic trails have their secret tales
That would make your blood run cold;
The Northern Lights have seen queer sights,
But the queerest they ever did see
Was that night on the marge of Lake Lebarge
I cremated Sam McGee.

About Knife Throwing Through Self-Hypnosis

With Knife Throwing Through Self-Hypnosis, Robin Richardson charts a path through a surreal otherworld that is at once carnal and aerial, fine-grained and crude. Yearning, unapologetic women who delight in the monsters they’ve created make these poems “a shield made of braids, / bassinet of broadswords,” and “a ghost-like choir where a love affair / becomes a pulp-book, plotted perfectly to end.”

Robin Richardson is also the author of Grunt of the Minotaur (Insomniac Press, 2011). She holds an MFA in poetry from Sarah Lawrence, where she received the Joan T. Baldwin scholarship and the John B. Santoianni Award (awarded by the Academy of American Poets).

She has been published in many journals including Tin House, Arc, The Berkeley Poetry Review, The Malahat Review, and The Cortland Review. Her work has been shortlisted for the ReLit award and longlisted for the CBC Poetry Award. She lives in Toronto, Ontario and Tweets as @robin_r_r.

Want more Robin? You can read an interview with Robin on The Toronto Quarterly blog here.

April 24, 2013
CoCoPoPro: Read This to Prevent Cancer of the Soul