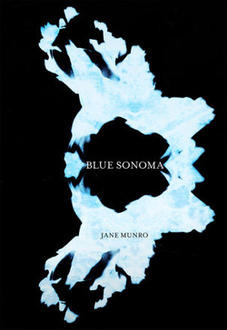 Poetry City: On the West Coast with Jane Munro

Canada doesn't have many big cities but we certainly don't lack for places that make an impact. In Blue Sonoma, the new collection published by Brick Books, Jane Munro is inspired by a small town on Vancouver Island.

Canada doesn’t have many big cities but we certainly don’t lack for places that make an impact. In Blue Sonoma, the new collection published by Brick Books, Jane Munro is inspired by a small town on Vancouver Island. 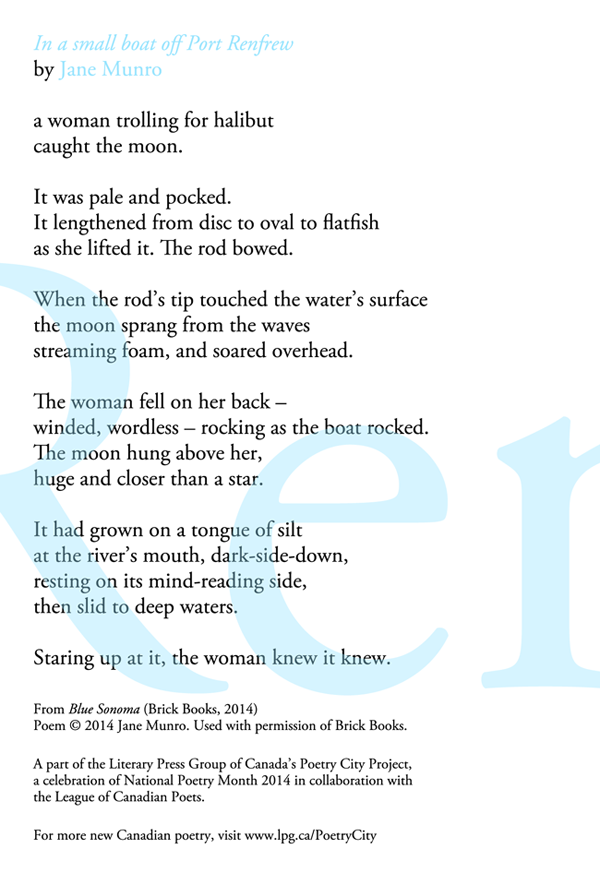 Port Renfrew isn’t a city, but it’s got grocery stores and gas stations, coffee shops and pubs, a fire hall, school and library, B&Bs, fish camps, a hotel and motels, some roads, quite a few houses and the government dock. It abuts a fabulous park: Botanical Beach & Botany Bay, where you can see the best tidal pools anywhere. I lived on the “wild coast” of Vancouver Island for twenty years and went to Port Renfrew many times.

It’s in the traditional territory of the Pacheedaht First Nation whose reservation lies across the San Juan River. They’ve fished for halibut in these waters since time immemorial. Although the fisheries for salmon and halibut are now, sadly, in decline, there are still anglers who go out in small boats off Port Renfrew and catch halibut. I’ve always felt halibut were a magical fish – they grow so big, are wide and flat, and have that migrating eye. One side of them is white, the other dark – like the moon. As a child, I was told that, at one time, the moon was part of the earth – that it came from under the ocean.

Since this is a dream poem, I’m not sure exactly why my dreaming mind set it where it set it, but these are some of the reasons why that setting makes sense to me.

In Blue Sonoma, award-winning poet Jane Munro gives us a wise and embodied collection of dreamscapes, sutras and prayer poems from a writer at her peak. She asks in various ways, “And us, were we substance or reflection?” Both inform these poems. “In a small boat off Port Renfrew," the magma of dream and reality transforms from a tugging on her rod to fish and then to moon as she reels it into consciousness. As Jane Hirshfield says, "A good poem is a bit like a volcanic island. It creates new terrain for the soul. "

Jane Munro is the author of five previous books of poetry. Her work has received the Bliss Carman Poetry Award and the Macmillan Prize for Poetry, and was nominated for the Pat Lowther Award. She is a member of Yoko’s Dogs, a poetry collective whose first book, Whisk, appeared in 2013. She lives in Vancouver.