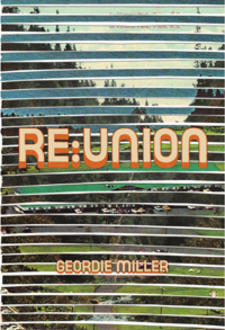 Geordie Miller explores his hometown of St. Catharines, Ontario from an adult perspective in today's Poetry City entry, from his new collection Re:union (Invisible Publishing, 2014). Tomorrow night, however, Geordie will be in Halifax at our National Poetry Month event!

Geordie Miller explores his hometown of St. Catharines, Ontario from an adult perspective in today's Poetry City entry, from his new collection Re:union (Invisible Publishing, 2014). Tomorrow night, however, Geordie will be in Halifax at our National Poetry Month event! Also happening Tuesday night (April 22nd) is our St. John's NPM showcase. See the exciting list of poets reading at both events tomorrow night here (as well as info about our other National Poetry Month events happening in: Toronto - April 23, and Winnipeg and Vancouver - April 28th!). 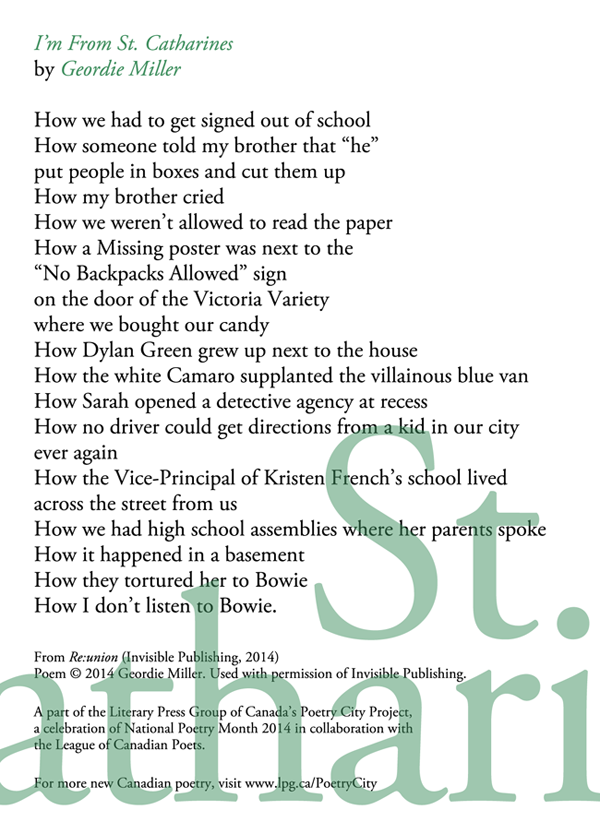 Notes on “I’m From St. Catharines” from Geordie Miller

There's the bare fact of being from a place, and then there's the set of associations with it that accrue—whether you're from there or not. This poem privileges the personal experience of my hometown, but through the lens of that outsider gaze i.e. the nightmare that the the proper noun St. Catharines could communicate. Because there's a way in which the insider/outsider distinction is a false one—only upon looking back could I recognize how much of what I wrote about in the poem was naturalized, not things that I ever questioned as a kid. For now I also approach the events as somewhat of an interloper, my memory of them as traumatic (in a limited sense, of course) conflicts with all the things about the city that are left out of that narrative. So perhaps as a place a hometown is only good for gathering what someone who isn't from there associates with it. Or maybe that's my excuse for being unable to write about St. Catharines with the same assuredness that accompanies the other places that appear in the collection, such as South Korea, Boston, Toronto, Ithaca, and my adopted hometown of Halifax.

Re:union is organized in four sections, each of which addresses a category that we use to assemble ourselves over social networking services (home, love, family, popular culture). It recodes these categories as poetry, mostly in the form of short lyrics—sometimes humorous, sometimes solemn, often both—as well as letters, which are like prose poetry with some words removed. These lyrics and letters are conversational, looking to speak to readers who haven't encountered much (if any) poetry, along with those who regularly seek it out. "I'm From St.Catharines" came out of a conversation, in fact. A couple of years ago I was at a reading where the author introduced her short story by alluding to Paul Bernardo. Afterwards I told her "I'm from St. Catharines," as if to substantiate my admiration for her story. I felt a bit silly saying it and then kind of stumbling through these impressions of growing up in one of the communities where Bernardo committed his atrocities. I decided to include it early on in the collection because I wanted to establish an idea of innocence as a way of living deliberately without it being necessarily naive—a longing for that as an impossiblity. I think that especially comes across in the final lines.

Geordie Miller does an American Literature PhD, stand-up comedy, articles on Canadian poetry, and summers of slo-pitch. Miller’s writing has appeared in The Coast, The Dalhousie Review, and the Rememberer anthology (Invisible Publishing). He lives in Halifax, NS, where he is an instructor at Dalhousie University.

For more poems about places in Ontario, check out our Poetry City Pinterest board. And get caught up on all things National Poetry Month on our hub page.