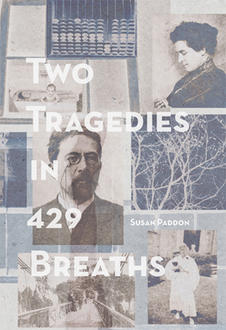 Get to Know Them First: Two Tragedies in 429 Breaths & Susan Paddon

In today’s edition of Get to Know Them First, our month-long series in which we speak with exciting new writers-to-watch, we feature Susan Paddon, author of Two Tragedies in 429 Breaths.

Paddon’s first published poetry collection has been called “a moving and mature first book filled with grace notes and deep resonance.” Read on to learn about Paddon’s love for Fred Astaire, and her life-changing trip to London, England.

In today’s edition of “Get to Know Them First,” our month-long series in which we speak with some exciting writers-to-watch, we feature Susan Paddon, author of Two Tragedies in 429 Breaths (Brick Books).

Paddon’s first published poetry collection has been called “a moving and mature first book filled with grace notes and deep resonance.” Read on to learn about Paddon’s love for Fred Astaire and life-changing trip to London, England.

Two Tragedies in 429 Breaths is a book-length series of poems written from the perspective of a daughter who reads Chekhov obsessively while spending a spring and summer caring for her mother, who is dying from pulmonary fibrosis. Through the prism of the relationships in Chekhov's work and life emerges an honest, intimate, and even occasionally humorous portrayal of the energy we put into each other's lives during times of deterioration and suffering. A prismatic, memorable debut

Susan Paddon was born and grew up in St. Thomas, Ontario, attended McGill and Concordia Universities in Montreal, and lived overseas in Paris and London before settling in Margaree, Nova Scotia. Her poems have appeared in Arc, CV2, The Antigonish Review and Geist.

I think I wanted to be an actor first. I was really into old Fred Astaire films that would come on television on Sunday afternoons. And then I loved Funny Girl and Beaches. I have red hair, so seeing a red head as a lead was a big deal for me. I started writing poetry very young, but I think what I really wanted to write (when I decided I wanted to be a writer) were screenplays. Poetry was my bathtub fun – because I wrote poems in the bath. And still do.

My first job was at the tourist information booth in Port Stanley, Ontario. It was a great job. We were located in the same building as the local theatre, so sometimes I would get to watch the rehearsals from the lighting booth. I met a lot of great people that summer. I was really bad at giving people information, though. Was it anything close to writing? Well, I read a lot and I got to eavesdrop, so yes, it definitely was.

Was the final title your first title for your book? Share previous options here!

No, the final title is different. For a long while, the book was called Consumed. I still like that title but it wasn’t exactly what I wanted.

Who did you tell first that your book was being published?

I was working at a gallery on the Cabot Trail when I got the email. I called my husband.

What is the first thing you eat in the morning?

I usually have a green smoothie. Or a coffee.

When was the first time you were on an airplane? Where were you going?

The first time I was on an airplane was when I was fourteen. My best friend’s family took me along on their family trip to England. We were going to visit my friend’s older sister (who was also my friend) in London, where she was studying. That trip changed the course of my life. I fell in love with London. When I moved to London eight years later, I could still remember certain intersections as I took double-decker buses around the city. I still love London and get to go back there frequently to visit my brother-in-law and his family.

Brick Books is the only publishing company in Canada that exclusively publishes poetry. Founded in 1975 in London, Ontario by Stan Dragland and Don McKay, the press continues its dedication to fostering interesting, ambitious, and compelling work by both new and established poets, and continues its commitment to deeply engaged editing.

We are guided by the principle of reserving several spots for beginning poets. As the years have gone by, Brick Books has received more and more submissions from experienced poets, and it would be easy for us to publish only those with reputations already established. But our conviction that poetry is the meditative instrument we most need now -- as individuals, and as a society -- requires that we think in the widest terms and take into account what is best for poetry itself and not only what would most profit us as publishers. It is increasingly hard for beginning poets to achieve book publication and we feel it is important that Brick Books, who has always been responsive to them (and aware of their value as presences in the culture at large), should keep the door open. Consequently, we make strenuous efforts to respond editorially with comments to all promising manuscripts to assist in their development.

The decision was made on September 17, 2012. We chose all the titles for the 2014 publishing year at that time.

How does the first cover concept for the book differ from the final look?

The cover concept didn’t really change between its design stages. It was in the details and execution that the initial and final covers differed most dramatically.

The book’s cover blends the author’s own family photos with images from Chekhov’s life, and stock photos depicting imagery from the poems. Through the design process colours and textures changed, decorative elements were added and removed and specific images were replaced with others. The most dramatic difference between early and final versions of the cover is in the treatment of the title and author text. Centered text atop a floating panel in early drafts, was replaced by a bold, left-justified san-serif treatment in the final. This produced a better integration between text and image by giving the images a stronger impact, and allowed the cover as a whole to better convey the idea of fragments of combined memory. 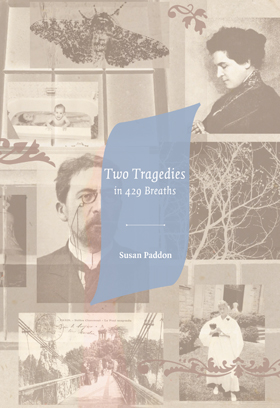 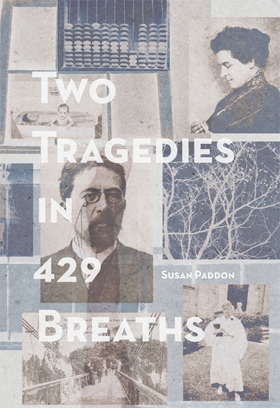 April 8, 2015
Get to Know Them First: Grey Eyes and Frank Christopher Busch