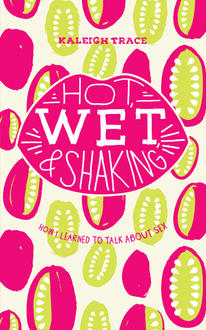 Get to Know Them First: Hot, Wet, and Shaking and Kaleigh Trace

This first book, in our Get to Know Them First series, coincidentally, features a lot of “firsts”: first loves, first orgasms, first times being fully comfortable in one’s own skin. As you may have guessed, it’s also about sex. Author Kaleigh Trace is a self-described disabled, queer, feminist sex educator who lays bare her own sexual self-discovery – with all the good and bad bumps along the way – in her book Hot, Wet, and Shaking: How I Learned to Talk About Sex.

In a glowing review in the National Post, Stacey May Fowles states that “We fall in love with [Trace] not only because we see ourselves in the stories she tells, but because of how readily and refreshingly she forgives herself for her failings and moves forward.”

So let’s get refreshingly sexy. Fall in love with Kaleigh yourself through our chat with her below.

This first book, in our Get to Know Them First series, coincidentally, features a lot of “firsts”: first loves, first orgasms, first times being fully comfortable in one’s own skin. As you may have guessed, it’s also about sex. Author Kaleigh Trace is a self-described disabled, queer, feminist sex educator who lays bare her own sexual self-discovery – with all the good and bad bumps along the way – in her book  Hot, Wet, and Shaking: How I Learned to Talk About Sex.

In  a glowing review in the National Post, Stacey May Fowles states that “We fall in love with [Trace] not only because we see ourselves in the stories she tells, but because of how readily and refreshingly she forgives herself for her failings and moves forward.”

So let’s get refreshingly sexy. Fall in love with Kaleigh yourself through our chat with her below.

This is a sex book. It’s a book about having sex by yourself, with one person, or with twenty people if everyone is down. It’s about saying words like cunt, fuck, and come. But it’s also about the things we don’t talk about—the mystery, the expectations, and the bullshit that can go along with sex. Kaleigh Trace—disabled, queer, sex educator—chronicles her journey from ignorance to bliss as she shamelessly discusses her sexual exploits, bodily negotiations and attempts at adulthood, sparing none of the details and assuming you are not polite company.

Hm. I've had this realization over and over. I mean, if you ever really realize something like that? I can't say for sure if I have ever had an epiphany where I have felt like "Oh! I know what I want to be!" But I have tried to be a writer on various occasions, and I suppose I am one now, so that is pretty exciting. Really exciting, actually.

To answer your question, I wanted to be a writer/school teacher/secretary at a very young age. That changed over time but I held on to the writer part and applied to a prestigious arts high school in the big city (Ottawa) when I was going into the 7th grade. I didn't get in, and so stayed in my small town and stopped really thinking about writing. Moving through university, I loved writing in my journal and writing lengthy emails and letters to friends far away, but never really considered "being a writer" as an actual possibility. By the time Invisible Publishing approached me with a book deal, I hadn't considered it in quite awhile, but was so excited about the possibility that I actually thought Robbie (of Invisible) was just fucking with me until I signed the contract. It felt too good to be true!

"Something"!? I want to answer almost everything. I was editing this book down to the last possible second. My two editors were busy trying to make sure everything was grammatically sound, and there I was, slipping in new sentences and cutting out others.

I imagine that anyone who has ever written a book has had a similar experience. It is very hard to feel like it's "finished", especially when one has been toiling over something for so damn long.

With this book, I ended up cutting out a lot of stuff about my family, mostly with regards to concerns about their privacy. I also wrote a whole chapter about my feelings surrounding the societal obsession with blow jobs, which I cut out because I felt I just couldn't get it right. And a bunch of other stuff - stuff about my sex and romantic life which felt too personal to share, stuff that made me feel extremely vulnerable. I could have edited until the end of time.

Was the final title your first title for your book? Share previous options here!

It took awhile to arrive at this title, and ultimately I really like it. In particular I like of the use of the verb "shaking". It's so fluid - it reflects nervousness, disability and a potential post-orgasm feeling. Or at least that's how I've been reading it.

There were some other very good potential titles as well. The working title had been "This Is A Thing That Is True". That is a phrase often exchanged between my editor and myself to boost our confidence levels. When I got scared she would tell me "Kay, this is a thing that is true: You are a writer. You are a good writer. You are writing a book. It will be great." The phrase naturally evolved into the book’s working title, but I am glad we didn't go with it in the end. It doesn't reflect the subject matter as much as I would like, and it's more of an inside way of expressing endearment than a public title.

We tossed around a bunch of other titles, many involving the words "Fuck It". My absolute favourite one was "There is Thunder in Our Cunts", a nod to Kate Bush's "Running Up That Hill" (playing on her line "there is thunder in our hearts"). I just love this line! However, my publishers pointed out that it doesn't really speak to the book’s contents, and they were right, and so we moved away from it. But still, I am happy with where we ended up.

Do you have your outfit picked out for your first author event/launch?

I'm answering these questions after my book launch! But yes, I did pick my outfit in advance. I went to the mall with a bunch of girlfriends who convinced me to buy a dress that wasn't black. I did end up wearing it to the launch, but there was a moment about an hour before the whole thing began where I broke down crying out of fear and anxiety and almost wore my short-shorts and New Balance sneakers for comfort. My partner convinced me to wear the dress, and she was right - it did feel way better to not be wearing my grubby, everyday clothes.

What is the first thing you eat in the morning?

Coffee. I know technically this is not a proper answer. And I almost did not want to write it, as breakfast is the most important (and tastiest) meal of the day and we should all be eating it. But as soon as I slither out of bed I go for the kettle. I just need that hot stuff. It is only after a cup of coffee that I can progress to food. This usually looks like yogurt & muesli (weekdays and rushing) or toast slathered in cheese and butter, topped with a fried egg and diced onions and salsa (weekends and lounging).

What is the first book you remember reading?

Best question! Though admittedly difficult to answer. I am not sure that there is one book that I remember reading first, but there are a few books that I encountered early in my life that had a huge impact on me. I was particularly obsessed with Nancy Drew at a young age. In particular, I identified with Nancy's best friend Bess, who in retrospect sounds pretty high femme. Also, according to Wikipedia she had "an extreme love of ice cream and other desserts." I feel you Bess! (Though I am feeling the fatphobia that was present in those novels significantly less).

I also have strong memories of being pretty effected by the book The Chrysalids which I read in 7th grade English. This is a dystopian post-apocalyptic novel where people who aren't physically "normal" are considered deviant and are killed or sent away to a place called "the Fringes". I remember realizing that if I were to exist in this reality I would be punished. But I was pretty young back then, and I am sure I missed some of the critical points made in the book. I would like to reread it now through a disability lens. I wonder if I would still like it?

That's part of our role as independent publishers: to take risks, to go out of our way to find work that's different, compelling, and to present it to new audiences. Ideally we surprise people.

Our first covers (both those for in-house discussion/use and those that make it into catalogues, etc.) are less collaborative than those we finally wrap around finished books. They often represent a single staff person's interpretation of the text. We know our author's and their works so much better by the time we're developing final revisions. The final covers almost always do more, say more.

We knew that Kaleigh was going to publish Hot, Wet, and Shaking before she even knew she'd written a book. Kaleigh's amazing. Her writing style, her personality… having read her articles and encountered her writing online, we pitched her on a book. That's pretty rare for us, but we felt strongly about Kaleigh and Hot Wet, and Shaking.