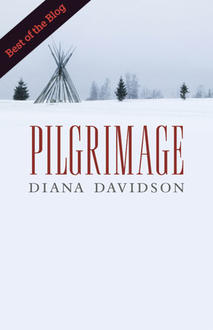 Yesterday The Orenda by Joseph Boyden was crowned the CBC's Canada Reads 2014 winner. If you were a member of #TeamOrenda and loved Wab Kinew's defense of the turbulent and difficult story told by Joseph Boyden then you might be interested in Pilgrimage by Diana Davidson.

Diana Davidson’s mom was my (excellent) high school English teacher in Beaverlodge, Alberta, but I didn’t know Diana until I read her (excellent) debut novel, Pilgrimage (Brindle & Glass, 2013). I was so excited when I saw that “Canada Reads Indies” had paired Pilgrimage with Joseph Boyden’s (excellent) The Orenda—there are themes in common with both books. And both are historical fiction; Pilgrimage takes place in 1891, on a Métis settlement. This is a great blog post that features an interesting, evocative interview with Diana and her publisher—it’s so refreshing to hear real answers to questions like “how is this a story only you could tell?” Reading this post made me want to re-read Pilgrimage!

Yesterday The Orenda by Joseph Boyden was crowned the CBC's Canada Reads 2014 winner. If you were a member of #TeamOrenda and loved Wab Kinew’s defense of the turbulent and difficult story told by Joseph Boyden then you might be interested in Pilgrimage by Diana Davidson. 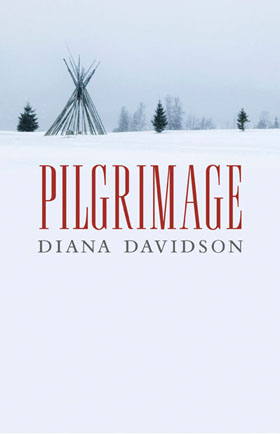 On this harsh and beautiful land, four interconnected people try to make a life in the colonial Northwest: Mahkesîs Cardinal, a young Métis girl pregnant by the Hudson Bay Company manager; Moira Murphy, an Irish Catholic house girl working for the Barretts; Georgina Barrett, the Anglo-Irish wife of the HBC manager who wishes for a child; and Gabriel Cardinal, Mahkesîs’ brother, who works on the Athabasca river and falls in love with Moira. Intertwined by family, desire, secrets, and violence, the characters live one tumultuous year on the Lac St. Anne settlement—a year that ends with a woman’s body abandoned in a well.

Set in a brilliant northern landscape, Pilgrimage is a moving debut novel about journeys, and women and men trying to survive the violent intimacy of a small place where two cultures intersect.

What other people are saying about Pilgrimage

“Crafted with care and with love, this beautifully constructed novel reveals hard truths and difficult secrets. Diana Davidson is a writer of great honesty and integrity, a writer to trust.” —Pauline Holdstock, author of Into the Heart of the Country

“Set in a brutal time, this novel is both lovely and ultimately heartbreaking. This is a stunning tale of survival, sex, and secrets. Diana Davidson is a writer to watch—this is a BRAVA! debut novel.” —Thomas Trofimuk, author of Waiting for Columbus

“Davidson’s Pilgrimage is a stunning novel that recreates a wild and grim Canada, a time rife with sexism and racism, a time that has been re-written and re-imagined by historians and scholars over the years. Davidson has masterfully turned the tables on these historical “facts” by using them create a fictional world more real than the one found in any history book.” —PRISM International

“An edifying, smartly written portrait of northern Alberta in the 1890s with characters that stick to the bones.” —Edmonton Journal 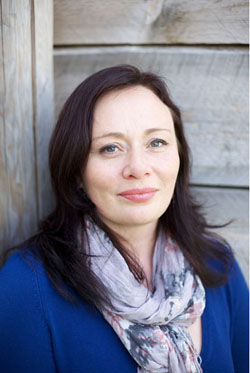 Diana Davidson is an award-winning author of creative non-fiction. She won the Writers’ Guild of Alberta’s Jon Whyte Memorial Essay Prize and was longlisted for the CBC Writes CNF Prize. Her writing has appeared in 40 Below, Alberta Views, Avenue Edmonton Magazine, Little Fiction, The Winnipeg Review, Women’s Words as well as the academic anthologies Analyzing Mad Men and Spectral America.  She has a Ph.D. in literature and has taught at the University of Alberta and the University of York, UK.  In 2011, she was chosen as one of Avenue Edmonton Magazine’s “Top 40 Under 40.” Pilgrimage is her debut novel. Visit Diana at dianadavidson.org, and follow her on Twitter at @DianaDavidson16.

We asked Diana some questions about Pilgrimage and she answered

Tell us what your book is about in 140 characters or less.
Pilgrimage is a story of love, loss, and hope set in the brutal beauty of the North.

(Why) does your book appeal to Canadians?
Pilgrimage is a story about a real place, Lac Ste. Anne, a site in Northern Alberta that has long been a place where people gather and hope for healing and redemption. At the time of the book (1891-1893), the Northwest was radically changing: the aftermath of Riel rebellions, the entrenchment of Treaties and reservations, the new railways opening up in Edmonton and Calgary all changed what-is-now-Alberta in profound, visceral ways. And I wanted to tell the stories of people who haven’t typically made it into our history books: Cree women, Métis girls, young working-class men who are scraping together a life, people who came from Europe to this new world and faced hardship even though they had privilege. And even though the stories I tell in Pilgrimage are hard and dark and sometimes brutal, my characters often believe that things could be better. So even though I put my people in difficult, heartbreaking moments, there is always hope. Pilgrimage is a very Canadian story in this sense I think.

How is this a story only you could tell?
I grew up in the North and, in some ways, Pilgrimage is my complicated love letter to Alberta. I know the history of this place (as well as anyone can). I mean, I grew up picking saskatoons in the summers, I’ve been on a trap line, I know some Cree. But, more importantly perhaps, like my characters, I also grew up in a small place where winter is harsh. I think that most of my writing tries to reflect that violent intimacy of living in a community where everyone thinks they know everything about everyone else. There is both a safety and destruction in that dynamic. And my main characters – Mahkesîs Cardinal, her brother Gabriel, Moira Murphy from Ireland, and Georgina Barrett the wife of the HBC Manager at Lac Ste. Anne – all know this both as intuition and as a necessity of survival.

What is your favourite quote in the book?
That is like asking a mom who her favorite kid is (laughing). It changes depending on the latest reading I’ve done or book club I’ve been invited to join. Today, I’d say it’s these lines from Gabriel’s perspective late in the novel: “Gabriel has to get back to them to try and make sense of this (…) he owes Moira that much. This is the part of being a man that Gabriel’s father could never teach him: the love of a woman is what both tears you apart and makes you whole.”  There is a truth in these lines that I didn’t necessarily recognize when I wrote them but now I do.

What’s a question you wish wish someone would ask you about your book and answer it here.
People have asked me really great questions about the Pilgrimage: how much research did it take, why Lac Ste. Anne as a setting, if I have ever trapped or skinned something. I expected people to ask me more about motherhood in the novel as it as theme that I was interested to explore in the context of the turn-of-the-century NorthWest. I am also fascinated with the symbolism of Lac Ste. Anne being named after Christ’s grandmother who is the Patron Saint of Childbirth. But readers are invested in the characters and the Edmonton Journal called Pilgrimage a book of “frontier feminism” so I’ll take that.

How did you come up with the first line(s) of the book?
Through a lot of trial-and-error.  The muse left me on my own for that one. I rewrote the first few pages of the book at least 47 times. And what is now Chapter One was at one point Chapter Three. In the end, I wanted to introduce Mahkesîs Cardinal and show her being trapped inside during winter.  I saved the beautiful lines about spruce trees heavy with snow and naked poplars reaching their spindly arms into the brutal, sharp northern sky for later in the paragraph.  So, “Outside, the dogs bark and Mahkesîs looks at the door” became the first line.

Founded in 2001, Brindle & Glass was awarded "Emerging Publisher of the Year" at the 2003 Alberta Book Awards and we've never looked back. We set out with a mandate to publish a diverse set of books: regional and national titles; new editions of books that should still be available; books for adults and for young readers; fiction, drama and poetry. But beyond our decision to publish books we are proud of, is a commitment to producing and promoting them appropriately and vigorously. Since our inception in Alberta, B&G has moved to Victoria and joined TouchWood Editions as its literary imprint. Visit us at www.brindleandglass.com and follow us on Twitter @BrindleAndGlass.


Why Brindle & Glass loves Pilgrimage? Why they think you should read it?

This is one of those books that doesn’t tell a ‘happy story’ on the surface of things but tells a GOOD story, one that touches the reader and stays with her. It makes you think about ‘happy’ stories and what they mean to us. We need the happy stories sometimes but we also need this kind of book that tells a ‘true’ (still fiction) story. Women do not have an easy life in Pilgrimage, little power, little freedom and little hope. But they still live these incredible lives. 1891 is a time of change in the west and the women played roles that helped shape our country. The story of the Métis characters and the settlement at Lac St. Ann, which continues to be an important place for pilgrimage today, play an integral part of the story, and one that is important to tell.

A beautiful book. Beautiful like a prairie winter – still and deep, at times dangerous and hard, but always with the hope of Spring coming.

Thank you to Brindle & Glass and Diana Davidson for answering our questions. We hope you've enjoyed following along with us as we presented the case for some great books published by great Canadian publishers (not that we're biased at all here at All Lit Up!). Check out Day 1 - 4 of Canada reads indie here.