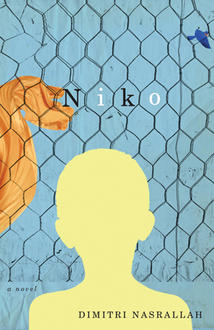 Rawi Hage's Cockroach is an unsettling and dark novel about the immigrant experience in Canada. As the panelists of CBC's Canada Reads mentioned, it is just one aspect of a story shared by hundreds of thousands of people across our nation. If you're looking to read another example of the immigrant experience in Canada why not try Niko by Dimitri Nasrallah. Let us make the case below.

Rawi Hage’s Cockroach is an unsettling and dark novel about the immigrant experience in Canada. As the panelists of CBC’s Canada Reads mentioned, it is just one aspect of a story shared by hundreds of thousands of people across our nation. If you’re looking to read another example of the immigrant experience in Canada why not try Niko by Dimitri Nasrallah. Let us make the case below. 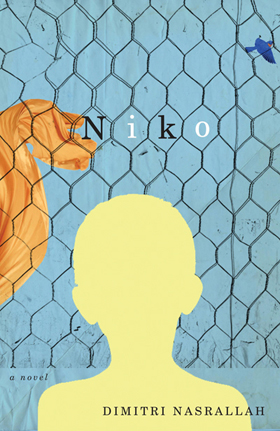 Longlisted for the 2013 IMPAC Dublin Award

Six-year-old Niko Karaam has never known a life outside civil war. He rarely leaves his parents' small apartment, and from its small balcony he listens to the world outside tumble down one building at a time. But after a car bomb kills his pregnant mother, Niko is thrust into a much wider and confusing world without apartments or balconies, as he and his father Antoine embark upon the open seas on an impossible international adventure in search of a new place to call home.

Throughout a twelve-year odyssey that leads them across seven countries, young Niko will have to choose between his swollen faith in an increasingly God-like and unreliable Antoine, and the pragmatic, hard-nosed alternatives that will ultimately lead to a better future.  Swiftly paced, poignantly moving, and beautifully imagined, Niko is the powerful epic story of what it takes to survive after war, of what to hold dear and what to leave behind in a world that won't let you have it all.

What others are saying about Niko

"Niko is a story of accepting the frailty of human beings and about moving forward through the bitterness of exile." —Montreal Gazette

Born in Lebanon during the civil war, Dimitri Nasrallah (B.Hon, MA) lived in Kuwait, Greece, and Dubai before settling in Canada in 1988. He is the author of two novels: Niko (Vehicule Press, 2011), which won the Hugh MacLennan Prize for Fiction and has been longlisted for the 2013 IMPAC Dublin Award; and Blackbodying (DC Books, 2005), which won the McAuslan First Book Award and was a finalist for the Grand Prix du Livre de Montreal. His short fiction has won the 2006 CBC Quebec Writing Competition, while his literary journalism has appeared in the Globe & Mail, Toronto Star, Montreal Gazette, and Montreal Review of Books.

He has worked prolifically as a music journalist and critic, serving as an editor at the national music magazine Exclaim! from 2009 to 2011. A teacher of both creative and essay writing, Nasrallah has served as a lecturer with Concordia University’s English Department since 2007.

We asked Dimitri some questions about Niko and he answered

Tell us what your book is about in 140 characters or less.
Niko loses his family to civil war, travels the world for a new home & ends up in Montreal; home is a place that accepts who you are.

(Why) does your book appeal to Canadians?
Niko offers a different take on how people come to live in Canada. The generally accepted myth of immigration to this country was mostly defined in the mid-twentieth century by waves of Europeans who settled here, but Canadian immigrants from the 80s onward have mostly come from other parts of the world and have arrived here for vastly different reasons, more often to do with leaving instabilities elsewhere than a desire to start fresh in an undefined place of new possibilities. This is how many new Canadians experienced Canada for the first time, yet this narrative is still under-represented in our literature and, to a degree, viewed as less valid or not quite Canadian enough as a course of mainstream opinion. So in that sense, this novel that proposes a different immigration myth is specifically for Canadians.

How is this a story only you could tell?
Not to encourage undue parallels between fiction and reality, but I spent nearly a decade living in other countries between leaving Lebanon as a child and immigrating to Canada. So my childhood was one of continuous travels, and by the time it finally came to an end, my childhood had ended as well. Looking back on it as an adult, I was struck by how the timing of those travels resulted in a rather unique experience. The entire voyage was set into motion by circumstances well outside my control when I was just old enough to start having a memory, it came to an end as I was becoming old enough to formulate my own strong opinions, and it took many years for me to accept that this phase of my life was not a crutch, but ultimately a gift. Those thoughts filtered their way into Niko’s mindset.

What is your favourite line from your book?
His life and the choices he’s made haven’t been perfect. But a person must bend sometimes. Sometimes he can’t foresee repercussions, and some decisions are made in moments of spiritual fog. This is why people are designed to carry mistakes, and this is why people should keep a room in their souls for what they might have done differently.

What’s a question you wish wish someone would ask you about your book and answer it here.
Q: Which character do you relate to most?

A: Readers always assume that I would relate to the boy Niko, as he’s the character who fits most easily into my biographical trajectory. But the truth is I related most readily to the tragic father Antoine and the reluctant uncle Sami, as the choices they had to make were more closely aligned with ones that were imminent in my life while writing the book. I was expecting a child at the time, and the delicacy of fatherhood, newly real to me, fed my imagination of those father figures.

How did you come up with the first line(s) of the book?
It crystallized as part of a flowing scene that originally appeared later in the book. But then I moved that scene to the front, and it just seemed to parallel the beginning of the book beautifully to my ear. So it was more a result of technical concerns than inspiration.

So many Canadians have found refuge in Canada, whether fleeing tyranny, wars or economic disparity. Immigrants are part of the fabric of this country. Dimitri Nasrallah’s novel, Niko, is the story of a little boy who has never known a life outside of Lebanon’s civil war. He and his father embark on a twelve-year odyssey that finally lands them in Canada. When the manuscript for this book crossed out fiction editor’s desk, he was struck by the honesty of the story and the power of the writing, and knew we had to publish the book.

Why they think you should read Niko

Although a work of fiction, the life of the protagonists in Niko are in many ways emblematic of so many people who have had to leave their homes—their countries. The writer Pasha Malla described it as a “novel about the ache and longing of exile.” It is all of this, but most importantly, the book should be read because it’s great writing.

Thank you to Vehicule Press and Dimitri Nasrallah for answering our questions. Catch up on Day 1 - 3 of our Canada reads indie suggestions here. We'll delve into our suggestion for what to read after the Canada Reads 2014 winner tomorrow!