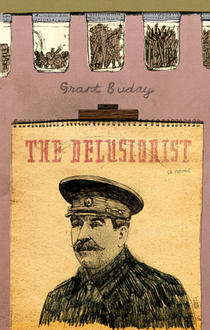 Do you like Canadian books that deal with issues and events beyond our borders? Unfortunately for fans of Half-Blood Blues by Esi Edugyan it was eliminated from Day 2 of CBC's Canada Reads but don't fret--we've got a book for you. The Delusionist by Grant Buday will be hot off the presses in the next couple of weeks and needs a place on your to-be-read list. Here's why.

Do you like Canadian books that deal with issues and events beyond our borders? Unfortunately for fans of Half-Blood Blues by Esi Edugyan it was eliminated from Day 2 of CBC’s Canada Reads but don’t fret… we’ve got a book for you. The Delusionist by Grant Buday will be hot off the presses in the next couple of weeks and needs a place on your to-be-read list. Here’s why. 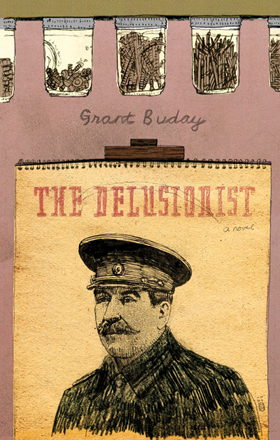 The Delusionist opens in the summer of 1962, with seventeen-year-old Cyril Andrachuk and Connie Chow falling in love. Yet at the end of this glorious summer Connie, an aspiring actress, decides to head to Hollywood, leaving Cyril devastated.

While Cyril loses love, his mother finds it in the form of Darrel Stavrik. Cyril’s father is long dead, yet Cyril can’t accept this replacement. Getting a gun he drives Darrel away, thus initiating an everlasting animosity between mother and son.

Cyril’s parents and older brother Paul endured the Holodomor, Stalin’s systematic starving of the Ukraine in the 1930s during which two million people died. When Cyril does a series of drawings of Stalin for his art school entrance portfolio, his mother destroys them. Failing to be admitted he blames her, moves out, gets work as a carpenter, and takes drawing courses at night.

While the content of The Delusionist is often dark, it is also comic in tone. When ill health finally overtakes Paul and he needs a kidney transplant, he laughs at Cyril’s offer to donate one, saying he wouldn’t give him one of his. Paul dies, and their mother blames Cyril.

Part Three opens in 1995. Cyril’s mother is dead, but she’s not done with him. Her will stipulates that Cyril must undergo a psychiatric evaluation or lose control of her estate to his nephew Chuckie, Paul’s son. Furthermore, his mentor and drawing instructor, Sandor Novak, gives him an ultimatum: participate in the group show or leave the class. It is time for Cyril to deal with his past and go public with his art. He does, succeeds, and in the final chapter Connie returns for a role in a film being shot in Vancouver. She and Cyril meet up again …

Grant Buday has published nine books and many articles, essays, and short stories in Canadian magazines and quarterlies. While he has travelled extensively throughout the world he currently lives on Mayne Island, British Columbia, with his wife and son, where he manages a recycling depot. He is fifty-seven years old.

We asked Grant some questions about The Delusionist and he answered:

Tell us what your book is about in 140 characters or less.
High school sweethearts Connie Chow and Cyril Andrachuk, the first an ambitious actress, the second an uncertain artist, rediscover each other in middle age.

(Why) does your book appeal to Canadians?
It’s set in Vancouver and deals with issues particular to Canadian culture and history.

How is this a story only you could tell?
There is a certain autobiographical element.

What is your favourite quote in the book?
The waitress scuffed over and flipped open her order pad like an angry cop ready to write a ticket. Her custard- coloured uniform was grease-stained and her name tag said GRACE.

What’s a question you wish wish someone would ask you about your book and answer it here.
Q: Is your humour serious?

How did you come up with the first line(s) of the book?
Got rid of the one that came before it, and then the one before that, until I hit a good one.

Anvil Press is a Vancouver literary press founded in 1991. Now in its twenty-third year of publishing, Anvil has firmly established itself as a publisher of progressive, contemporary Canadian literature with a distinctly urban twist. An award-winning publisher of poetry, fiction, and non-fiction, Anvil has become known for its quality books and unconventional literary work. National—and local—in its vision, Anvil remains committed to its East Vancouver roots, and doesn’t shy away from work from the wrong side of the tracks.

Why Anvil loves The Delusionist? Why they think you should read it?

For one, Grant Buday is a brilliant storyteller, a master crafter of the self-contained worlds in which he places his characters. The characters in Buday’s fiction are real, everyday people that readers can relate to; they are people you pass by on the streets of your community.

The Delusionist also shines light on an under-examined atrocity in world history, that of the Holodomor, in which millions of people in the Ukraine were systematically starved to death by Stalin and his communist regime.

And, Grant Buday has a wonderful sense of black humour. The Delusionist is a funny, sad, and heart-warming novel about love, loss, creativity, and coming to terms with the horrors of history.

Thank you to Anvil Press and Grant Buday for answering our questions. Missed Day 1 of our Canada reads indie suggestions? Check out The Unplugging here. Be sure to follow along the rest of the week for more great books to add to your to-be-read list.