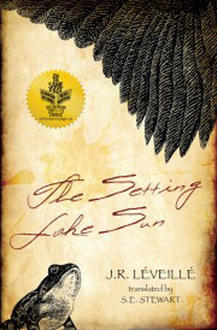 Protagonist Ginny won’t let aging get her down: she adopts a white rat, names him Mr. Loverat, and has their adventures chronicled in this quirky book from Guernica Editions.

Exploring the relationship between a young Métis architect and an older Japanese poet, this book is as much about their new love as it is a love letter to the city of Winnipeg and the ever-inspiring wilds to its north.

This book juxtaposes one man’s darkest passions against the banality of a daily diary. The results are shocking, not only in the horror of protagonist Lucien’s actions but the raw, human loneliness lying just below its surface.

Winner of the 2008 Governor General’s Award for French-language Poetry, poet Pleau evokes nostalgia, nature, and childhood innocence in his collection.

Shortlisted for both the Governor General’s Award for Translation (2007) and the Griffin Poetry Prize (2008), this collection is filled with what La Presse calls “syntactical hijackings” – a dissonance between the objects called out and what they inspire in the reader.

Winner of the Governor General’s Award for French-language Poetry in 2007, One is an exploration of wholeness through anecdotes, pop-ups, leitmotifs, and the words of Paul Valéry: “Alone one is”.

This book of poetry maps movement in unison through words. Poet Neveu explains her process of performing physical floorwork before writing: “Because writing — and poetry — is the movement of words, I move my body through various places to write. Words are like bodies. Physical.”

A book of poetry written for the stage, Just Like Her explores in four acts the generational bonds between mothers and daughters – and the tensions inherent within them. This book was performed as Tout comme elle at Toronto’s 2011 Luminato festival.

This translated play is itself an adaptation of Marie Cardinal’s novel Une vie pour deux (“A Life for Two”): a story about a troubled couple coming upon a dead woman while vacationing on the Irish coast. It has recently been adapted into a French-language film.

These five plays are well known to French-Canadian audiences: four have been broadcast on Radio Canada. First written in the 1970s-1980s, the plays have a renewed relevance; portraying characters battered but not broken.

A young boy accompanies his candy-and-cigarette salesman father outside their 1940s rue Fabre neighbourhood to a never-before-seen world: the towns and cities surrounding Montreal.