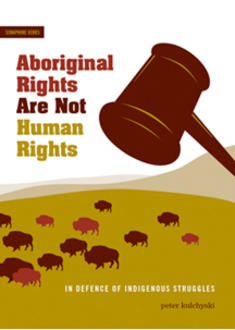 First introduced in 1992, the four-day week that follows the Victoria Day holiday is Aboriginal Awareness Week in Canada. The purpose of the Week is to celebrate the cultures and contributions of Aboriginal peoples. We're taking part by shining a spotlight on Peter Kulchyski's new book Aboriginal Rights Are Not Human Rights: In Defence of Indigenous Struggles (ARP Books, 2013). Kulchyski, a leading Canadian Native Studies scholar at the University of Manitoba, provides a conceptual and historical analysis of Aboriginal and treaty rights in Canada, and discusses how these traditional Aboriginal rights don't fit in with the contemporary idea of universal human rights. 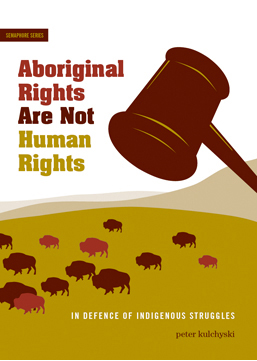 First introduced in 1992, the four-day week that follows the Victoria Day holiday is Aboriginal Awareness Week in Canada. The purpose of the Week is to celebrate “the cultures and contributions of Aboriginal peoples.”

Here on the LPG blog we’re taking part by shining a spotlight on Peter Kulchyski’s new book Aboriginal Rights Are Not Human Rights: In Defence of Indigenous Struggles (ARP Books). Kulchyski, a leading Canadian Native Studies scholar at the University of Manitoba, provides a conceptual and historical analysis of Aboriginal and treaty rights in Canada, and discusses how these traditional Aboriginal rights don’t fit in with the contemporary idea of universal human rights.

How did your interest in Aboriginal Rights and issues begin and take root?
i grew up in the mid north of canada, in bush country in northern manitoba, where i attended a government run residential school. so from an early age, really by the time i started university, i’ve known that there’s something deeply wrong with the way indigenous peoples are treated. i devoted myself to studying the issues from a politics vantage point throughout my student years, and to working as an activist around the issues, but also travelled to as many indigenous communities – and i still do so – to get a sense of the daily life realities. those experiences, the people i’ve met and the things i’ve seen, continue to motivate me.

Why is it so important to distinguish between Aboriginal Rights and Human Rights? Wouldn't it be a better political strategy to use the popular support for human rights in the cause of Aboriginal struggle?
the problem is that the struggle for human rights can sometimes actually work against the achievement of aboriginal rights. for example, the struggle for ‘equality’ or to end discrimination often implies that indigenous peoples in canada should be happy in the melting pot. an anti racist discourse, when applied to indigenous issues, does not neatly translate: while there are racisms that broadly affect indigenous peoples, the issues can not be encapsulated by the same strategies and approaches used in anti racist struggle. so i felt i should lay out some of the differences. i’m not saying indigenous people should not have human rights (or, worse, should not be counted as human); but that for them the specific particular rights that they enjoy need to be respected and not submerged under the broad umbrella of human rights. 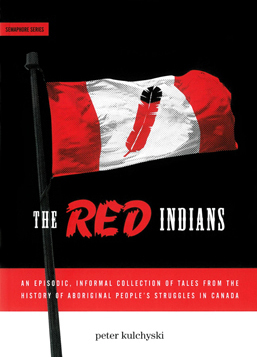 Why is this book timely now?  As with your earlier book, The Red Indians, you place great importance on understanding the history of aboriginal movements and struggles, but how do you understand the current prospects for Aboriginal peoples?
i think the book is timely on two counts: as we begin to pay attention to the united nations declaration on the rights of indigenous peoples, my criticisms of it from the left might help us see its limitations. but also and secondly, the moment of struggle now with idle no more and other waves of dissent is drawing many more people into engagement around these issues than we’ve seen in quite a while. as a result i also think a book that lays out some of the specific issues faced by indigenous people, that explains a bit about why aboriginal and treaty rights deserve to be respected, that lays out a particular theoretical approach to these issues, but that is written to be generally accessible and oriented to activists, could play a constructive role in the current ‘historical conjuncture’. of course, we can’t really understand what that ‘conjuncture’ is without reference to history. i do see the red indians as more of a historical work and aboriginal rights are not human rights as a more theoretical or current politics type of work. as to the prospects for aboriginal peoples, we know that the current federal regime is taking the worst possible approach. now is therefore not the time to get change from within, but to go on the attack from the outside, to build a movement. and there is much promise around the possibilities of doing so.

How has your experience working with aboriginal people in northern communities informed your understanding of aboriginal rights?
most of my understanding comes from my work with communities, though i have also learned from and been informed by a variety of scholars, including some of the great emerging indigenous scholars, who work on these issues. i think working in northern indigenous communities helps me see the many concrete facets of what is often discussed in fairly abstract terms. i know that hunting ducks in the springtime for dene and cree, for example, is a real annual practice that, sometimes, the law has to catch up to. i’ve seen undocumented sacred sites. i’ve seen communities mired in social misery. i’ve seen brilliant local activists fighting against all odds with great perseverance to achieve justice. the social traumas i witness motivate: we have to do something better. they remind me that kids deserve to be in schools where they don’t find mice droppings on their desks, that people deserve clean water and housing and dignity, that there is so much that needs to be done. the creativity and patience and strength of so many people at the same time truly inspires me: everywhere i go i meet someone or some people who show me that real courage still exists in this world. my understanding of aboriginal rights is not that this is some abstract, highly theoretical, legally complex set of doctrines, but that aboriginal rights live and are inhaled and exhaled every day in northern communities.

What's at stake in acknowledging the particular rights of aboriginal people? In other words, if the courts have generally sided in their favour, at least in recent decades, why do governments in Canada so often disregard aboriginal rights?
this is a critical question to my mind. i think governments disregard aboriginal rights because they are an impediment to what they call ‘development’. by development, they mean ripping up the earth for profits. and super profits. and super duper profits. what they call development i call greed. at a minimum, recognition of aboriginal rights would mean they have to share more with indigenous peoples, and that cuts into their profits. at a maximum, recognition of aboriginal rights in some places would call into question the whole notion of unending growth that our current society is founded upon. and that would overturn more than a few applecarts. there is a strong element of racism in this, what i call a racial redistribution of wealth from the north to the south. there is a more insidious aspect of the struggle for aboriginal rights, in that aboriginal rights provide a legal basis for meaningful cultural difference. but the purpose of the state in late capitalist societies is to help create a homogenous social sphere, where everyone lives the same notion of time, space and personal identity. in the end they want indigenous peoples to conform to the social rules we all live by. a universal notion of human rights can sometimes be complicit in spreading these rules under the name of equality; aboriginal rights are a legal support for meaningful cultural difference, for a different set of rules. some of those different rules line up quite nicely with the values that socialists like myself aspire to achieve.

Also, we'll be back at the end of the week with a booklist featuring some of the great books written by Aboriginal authors that have been published by our members.