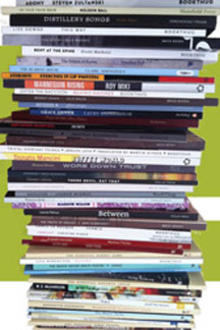 A few months ago, I had a conversation with a customs officer that went something like this:

In fact, in 2012 the Literary Press Group publishers collectively produced more than 170 titles of diverse Canadian poetry created by accomplished poets from every corner of this country. So, yes. They still make poetry. And the goal of National Poetry Month (which starts today!) is to take poetry beyond its usual haunts; to share it with people who might not realize how much they'll enjoy it.

So today we’re kicking off our 30-Day Coast-to-Coast Poetry Project (and, forgive us, but we may refer to this as CoCoPoPro). By the end of the month we'll have shared a new poem every day from a different poet, collection, and independent Canadian publisher.

Each poet has also answered a special Q&A, and you'll love the responses.

"Odds Were" from Omens in the Year of the Ox by Steven Price (Brick Books, 2012)
"Martha McBride Knight" from Glossolalia by Marita Dachsel (Anvil Press, 2013)
"Who Loves Ya, Baby?" from The Hottest Summer in Recorded History by Elizabeth Bachinsky (Nightwood Editions, 2013)
"Mathias Eick" from Sound Off by Stephen Bett (Thistledown Press, 2013)
"The Flicker Tree" from The Flicker Tree by Nancy Holmes (Ronsdale Press, 2012)
"For the sparrow too small to name" from One Crow Sorrow by Lisa Martin-deMoor (Brindle & Glass, 2008)
"Live Earth" from Fire Watcher by Vivian Demuth (Guernica Editions, 2013)
"God Bless the Bear" from A Long Continual Argument: the Selected Poems of John Newlove (Chaudiere Books, 2008)
"Service Rig" from The Lease by Mathew Henderson (Coach House Books, 2012)
"Bloody Jig Why Ever Stop Fiddling Around" from Indigena Awry by Annharte (New Star Books, 2012)
"The Last And" from Lyrics & Poems, 1997-2012 by John K Samson (ARP Books, 2012)
"A Song Like Heels Clicking" from Here is Where We Disembark by Clea Roberts (Freehand Books, 2010)
"I Talked With the Moon" from Beautiful Razor by Al Hunter (Kegedonce Press, 2012)
"Dominion Day" from Great Canadian Poems for the Aged, Vol. 1 Illus. Ed. by Michael Boughn (BookThug, 2012)
Six Haiku from Love Is Not The Way To by Stan Rogal (BookLand Press, 2013)
"Questions in Bed" from Questions in Bed by Stewart Cole (Goose Lane Editions, 2012)
"Flights In" from Masham Means Evening by Kanina Dawson (Coteau Books, 2013)
"New Clothes" from Ignite by Rona Shaffran (Signature Editions, 2013)
"4" from For As Far As the Eye Can See by Robert Melancon, translated by Judith Cowan (Biblioasis, 2013)
"Reading the Russians in a Country Restaurant" from In the Vision of Birds by Steve Luxton (DC Books, 2012)
"Why So Many Dogs" from The Hundefraulein Papers by Kathy Mac (Roseway Publishing, 2009)
"Peril" from Burning House by Richard Lemm (Wolsak & Wynn, 2010)
Excerpt from Emily: Song of a Newfoundland Life by Denise Batten (Creative Book Publishing, 2012)
"First Boat" by Mary Dalton from The Breakwater Book of Contemporary Newfoundland Poetry, edited by Mark Callanan and James Langer (Breakwater Books, 2013)

Edited from the original post, published on the LPG blog for National Poetry Month 2013